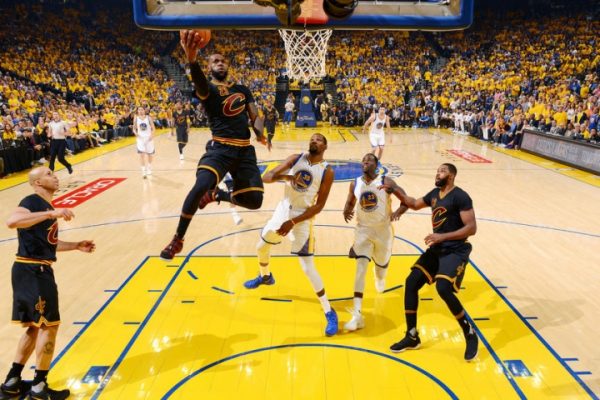 (Oakland, CA) — Unable to mount a full second-half comeback after being on the wrong end of a 28-4 second-quarter run, the Cleveland Cavaliers watched their season come to an end as they lost 129-120 in Game 5 of the NBA Finals to the Golden State Warriors. The victory clinched the series for the Warriors and gave them their second title in the past three years, with Kevin Durant being named Finals Most Valuable Player.

“I have no reason to look back and wonder if I should have done something,” LeBron James said after becoming the first NBA player to average a triple-double in the NBA Finals. “It’s my eighth trip to the Finals and I’ve had some pretty good ones. It’s a compliment to the other guys on the team that let me do it.”

Cleveland had held a 37-33 lead after one quarter, and a quick start to the second period that combined with Golden State missing their first five shots from the field resulted in a 41-33 advantage. It was at that point that the momentum of the contest shifted dramatically with the Warriors going on their devastating run over the next seven minutes.

That turned the Cavs’ lead into a 61-45 Warriors advantage, a push that was briefly stopped with 3:08 left before halftime. That was when the Warriors’ David West angrily ripped a rebound away from Kyrie Irving and was subsequently assessed a technical foul. However, both Tristan Thompson and J.R. Smith were also given technicals for confronting West.

The Cavaliers did manage to chip away for a short period, but Golden State then took its largest lead of the game at 69-50 with 1:10 left before intermission. Still, the Cavs scored 10 of the final 12 points to make it a 71-60 contest at the half, the last 3-pointer coming on a nearly 30-foot 3-pointer by Smith in the closing seconds.

“Turnovers, bad shot selection,” Cavaliers head coach Tyronn Lue said in response to the team’s main issues with the second quarter. “It’s tough to get back, especially with their speed.”

Managing to stay close during the third quarter, the Cavs had three different opportunities to make it a one-possession game. However, they weren’t able to convert on those attempts but did chop the margin to five points at 98-93 by the time the quarter had ended. That final basket came courtesy of Smith’s fifth 3-pointer of the night, completing a period in which the Cavs shot 60 percent from the field.

The Warriors cemented the victory by shooting 65 percent from the field in the fourth, with Stephen Curry‘s layup with 4:13 left serving as the backbreaker, giving them a 122-108 lead. Many of those other baskets were feeds inside as the Cavs defense struggled to defend in those final 12 minutes.

“They started to go to the 1-3 pick-and-roll and that’s one of the toughest things to defend against, especially against a team like this,” Lue said.

Another key difference in the contest was the respective scoring production from each bench, with the Cavaliers getting outscored by a whopping 35-7 in that department. Finally, after hitting for a record 24 3-pointers in Game 4, Cleveland hit for just 11 on the night.

“It’s unfortunate that some of the guys on our team that haven’t had the chance to lift the trophy didn’t get to experience that,” James said. “That’s one of the biggest things that bothers me.”

For the Cavs, James paced the team by scoring 41 points, grabbing 13 rebounds and handing out eight assists. Meanwhile, the starting backcourt of Irving and Smith combined for 51 points, with Smith connecting on 7-of-8 from long range. Irving finished with 26 points, six assists, and two rebounds, while Smith added three rebounds. Thompson scored 15 and also hauled down eight boards.

“I banged my knee and my back stiffened up and that meant that a lot of shots I ordinarily make didn’t fall and that kind of took the wind out of our sails,” Irving said. “But you don’t want to use that as an excuse, they beat us fair and square.

“This has probably the been the longest year and a half of my life, but you can’t wallow in it. You have to move on. We dealt with a shit-ton of adversity, but I couldn’t be prouder of this team.”

Entering the offseason, the first objective for the team is to sign general manager David Griffin to a new contract. After that, dealing with a trio of free agents: Kyle Korver, Deron Williams and Derrick Williams, will be next on the agenda.

“I don’t see a big gap, but against good teams, you can’t give away games like Game 3 and then try to make it up by winning in this place,” Lue said.

James also refused to put a negative stamp on the end of the Cavaliers’ season, though he did lament one issue:

“It would have been great to see what we could have done as a healthy team throughout the season,” James said. “But there’s no such thing as a failed season.”