Don't Miss
Home / Videos / Video: Warriors Get Away With Two Blatant Flagrant Fouls in the Second Half

Video: Warriors Get Away With Two Blatant Flagrant Fouls in the Second Half 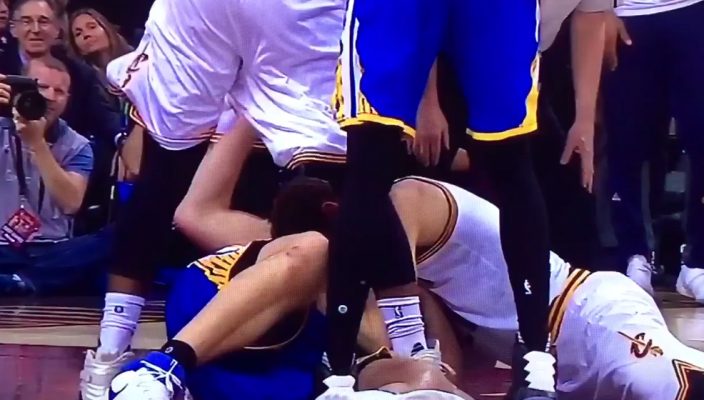 Fans of both the Golden State Warriors and Cleveland Cavaliers are most certainly going to have something to say about the referees after how Game 4 of the 2017 NBA Finals was refereed on Friday night.

To begin with, Warriors forward Draymond Green was whistled for what had appeared to be his second technical foul, as his first technical was recorded on the box score in the first half. However, the referee who had called that initial technical foul said that the original call was actually on Warriors head coach Steve Kerr and rescinded the first technical, enabling Green to stay in the game.

It didn’t stop there.

Later, in a scramble on the floor for a loose ball between guard Iman Shumpert and Warriors big man Zaza Pachulia, Pachulia is clearly shown taking a shot at Shumpert’s groin. However, after further review by the officials, no flagrant foul was called.

Afterwards in the fourth quarter, on a Tristan Thompson drive to the basket, watch as Green comes down with two hands to Thompson’s head on the latter’s way up. Not only was Green not called for a flagrant foul on the play, but he wasn’t even called for a common foul as the foul was called on Shaun Livingston beforehand.

Nothing called on Draymond Green on this play- foul was on Shaun Livingston before Green made contact pic.twitter.com/BhDgfgoxv4

The Cavs eventually came away with a historic 137-116 win over the Warriors in Game 4, but going into Game 5 in Oakland, it’s going to be as hostile as an environment as ever.