Why Cleveland’s Championship Hopes All Come Down to Kyrie Irving 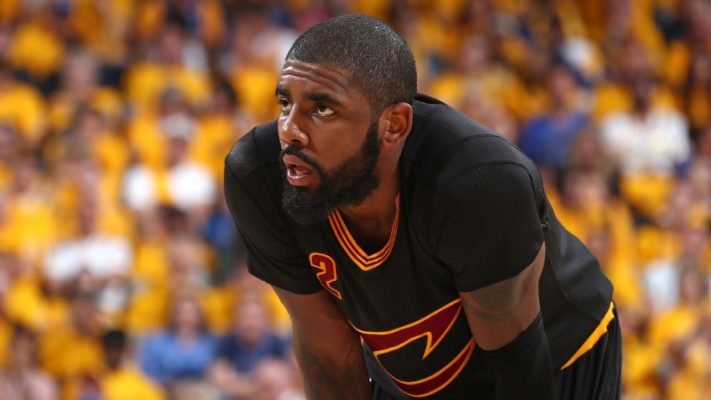 With the Cleveland Cavaliers no doubt experiencing many of the same emotions they had felt a year ago as they found themselves trailing the Golden State Warriors 2-0 in the NBA Finals, the quest towards figuring out how to defeat the 2017 edition of the Warriors continues. One of those answers undoubtedly lies in the play from their starting point guard, Kyrie Irving, whose performance hasn’t matched the output provided by the Warriors’ starting point guard, Stephen Curry.

The task of defending against either Curry or his backcourt mate, Klay Thompson, presents a stiff challenge for any guard. Cavs head coach Tyronn Lue is aware of that issue, pointing out that such efforts result in Irving paying the price on offense.

Irving’s offense has pretty much been held in check during the first two games of the 2017 Finals, hitting on just 40 percent (18-of-45) of his shots from the field, compared to 46.6 percent during the first three rounds of this year’s playoffs. One of the issues that he’s been forced to deal with has been a concerted effort on the part of the Warriors to limit his effectiveness, a factor that’s definitely gotten his attention.

“Just seeing a lot of bodies,” Irving said. “They’re obviously trying to make a few other guys make plays, and when we’re coming off our isolations, they’re bringing a few more bodies to clog the lane. For us, just see the weak-side action and be able to make the passes. We have to sustain effort over the entire game. We understand how dangerous they are.”

While the contributions of both LeBron James and Kevin Love are equally vital to the success of the Cavaliers, Irving’s performances in the games ahead will likely dictate if another comeback like the one last year is in the cards. Given the minimal contributions the Cavs have gotten so far in the Finals from other members of the backcourt, the pressure on Irving has increased. Though he obviously knows how to deliver in the clutch, the bottom line is that his current production isn’t sufficient enough to help deliver a second consecutive title.

“I just tell him to continue to be patient. The game will come to you. Just keep asserting yourself,” James said. “We have to figure out a way to get him going early. He’s been such a big piece of our success the last three years, obviously. He missed some chippies, ones he’s so accustomed to making.”

Despite those problems, Love has confidence in his teammate’s perseverance and the leadership he brings to the team.

“We ride or die with Kyrie,” Love, said. “Kyrie knows what he’s capable of in this building, in the league, at our building. I would imagine Kyrie’s going to come out and have a great Game 3.”

In last year’s Finals, Irving averaged 30.0 points per game in the team’s four wins and just 23.3 in the three losses. Many of the same concerns that are being heard now had surfaced after the first two games of the 2016 Finals, when he averaged just 18.0 points and contributed just 10 points in an embarrassing Game 2 loss. Two weeks after that defeat,  his iconic last-minute 3-pointer helped give the Cavaliers their first-ever NBA title and showed just how important he was to the team’s fortunes. The message is the same in 2017, with another Larry O’Brien Trophy largely dependent on Irving’s play in the games ahead.