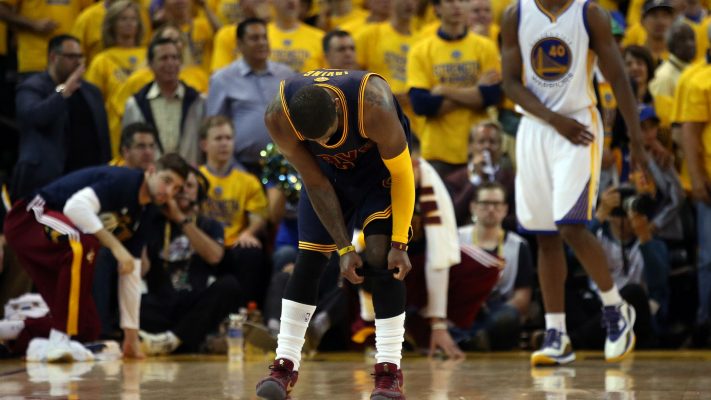 The play of Cleveland Cavaliers point guard Kyrie Irving during the first two games of the NBA Finals has caused some members of the media to criticize his effort, citing his 18-for-45 shooting from the field and the 60 points scored by his counterpart for the Golden State Warriors, Stephen Curry. However, it appears that Irving’s physical health may be the cause of this issue, specifically related to his knee.

Kyrie said his knee wasn’t right late in season. He’s been banged up in playoffs, too https://t.co/kQwElq79gt

Two years ago, Irving’s season ended when he suffered a fractured kneecap in overtime during Game 1 against the Warriors. That injury kept him off the court for the next six months. However, since returning, Irving has played virtually non-stop over the past 18 months, beginning with helping the Cavaliers to the franchise’s first-ever title last June. From there, playing for the United States Olympic team at the Rio Games lasted until mid-August, which offered him just a month of rest before the Cavs’ training camp began.

Irving hasn’t been forced to leave any game because of injury, yet the cumulative effect of all that playing and his past injury history could potentially make him more vulnerable and sideline him for the remainder of the series. That would dig an even deeper hole for the Cavaliers than the one they already find themselves in after the first two games of the Finals.

After two days of rest, Irving and the Cavs will attempt to get back on track when they host the Warriors in Game 3 on Wednesday night, with tipoff set for just after 9 p.m.