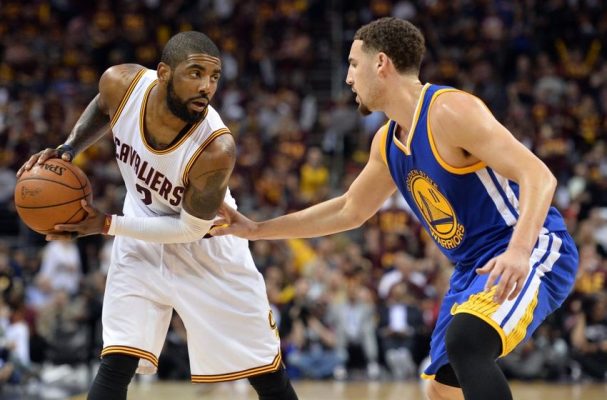 No doubt haunted by the memory of watching Cleveland Cavaliers point guard Kyrie Irving score the game-winning 3-pointer in Game 7 of last year’s NBA Finals, the Golden State Warriors are making every effort to avoid a repeat of that situation when this year’s Finals get underway on Thursday night. Warriors guard Klay Thompson indicated on Sunday that the team is putting together a game plan that will attempt to slow Irving down.

Thompson, who happens to be in the midst of an offensive slump, will be responsible for guarding Irving and is confident he’ll be able to keep him under control. One of those strategies will be to crowd him and keep pace with the sixth-year guard.

“I take pride in (playing) both sides of the ball, defense as equally as offense,” Thompson said. “Whether or not my shot falls, I can always control that part of the game.”

Awareness of Irving’s ability in the clutch isn’t something new to Thompson.

“He’s done it in big moments, so you’ve got to give him credit,” Thompson said of Irving. “Not only have I seen him do it in the pros, but I’ve seen him do it with the USA Team, too. Kyrie’s a very tough guard. We’ve got a game plan for him, and it’ll be fun.”

Thompson hopes to regain his shooting touch during the upcoming series, if only because it would make Irving have to work harder on defense.

“I’d like to see the ball go in the basket,” Thompson said. “It has, just not as frequently as I want. But that means nothing now. That’s in the past. It wouldn’t have mattered if I shot lights-out if we didn’t finish the job off.

“Now that we’re here, it’s a clean slate. It’s time to go. Can’t be worried about a few bad shooting games or the percentages when you went 12-0. You’ve just got to do what you can and have the intentions to win the game, not to go out there and score a number of points but to just go out there and win the game and make winning plays. That’s what I’m focused on.”

Warriors interim head coach Mike Brown, who coached Irving during the 2013-14 season, is equally confident that Thompson can handle the task of defending a player that Irving’s teammate LeBron James has referred to as an all-time great in the area of one-on-one play.

“The way he puts English on the ball, how high he gets it off the glass when he needs to, all those things play into a factor of why he is one of the greatest one-on-one players of all-time.”

On Thursday night,  Thompson’s first effort to clamp down on Irving will be made when Game 1 tips off just after 9 p.m. ET.