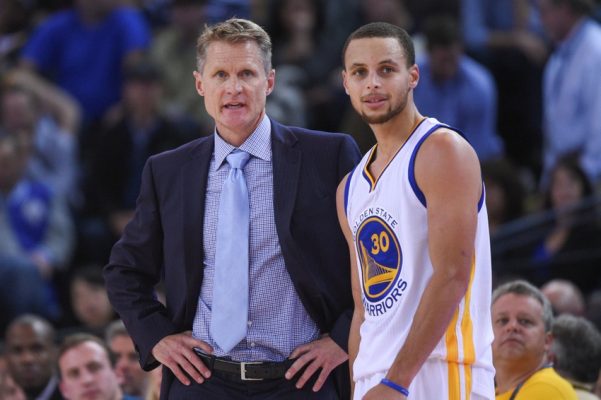 The health status of Golden State Warriors head coach Steve Kerr has been a continuing issue over the course of this year’s playoffs as he deals with complications from back surgery that was performed two years ago. On Monday, he spoke to Bay Area media and indicated that he’s still unable to resume his duties on the sidelines, with the Warriors set to take on the Cleveland Cavaliers in the 2017 NBA Finals beginning on Thursday night.

Steve Kerr says he's still not ready to return. Says he still feels some of ailments. Mike Brown under the weather, thus why Kerr speaking.

The 51-year-old Kerr missed the first 43 games of the 2015-16 season as a result of his surgery and has had complications since, such as a spinal fluid leak that resulted in issues like nausea and migraine headaches. He’s been unable to coach since Game 2 of the first round of this year’s Western Conference playoffs.

The fluctuations in his health are such that he could have conceivably returned during periods when he was in less pain. However, he had previously ruled out any rush to return:

“This is not going to be a case where I’m coaching one night and not coaching the next. I’m not going to do that to our team, our staff,” Kerr said last month. “We’re hoping that over the next week or two, whatever it is, that I can sort of make a definitive realization, or deduction, or just feel it, that I’m going to do this or I’m not.”

In Kerr’s place, assistant coach (and former Cavaliers head coach) Mike Brown is handling his duties. Since taking over, Brown and the Warriors have won 10 consecutive games and have yet to be defeated this postseason.

The first two games of the Finals will take place on the Warriors’ home court before the scene shifts to Cleveland for the following two contests next week.