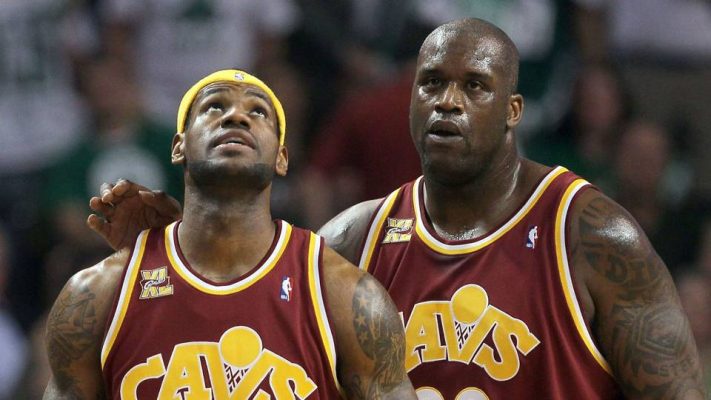 Cleveland Cavaliers forward LeBron James has been compared to many former NBA greats during the course of his 14-year career. As he prepares to compete in his seventh consecutive NBA Finals and eighth overall, his former teammate Shaquille O’Neal believes that James embodies a little bit of four different legends: himself, Michael Jordan, Magic Johnson and Kobe Bryant.

Joe Vardon of Cleveland.com talked to O’Neal about James, who shared the court with the Hall of Fame center during the final season of his first tenure with the Cavaliers in 2009-10.

“He’s a mixture of Michael, Shaq and Magic,” O’Neal said. “Shaq, because he’s bigger and stronger than everybody. Michael because he can score whenever he feels like it. And Magic because he does a great job getting everybody else involved. He’s been like that his whole career. Even in high school. I knew he was a special guy in high school.

“I’ve only met two people like him. Him and Kobe. Guys that were super determined ever since high school and accomplished all their dreams, and just wanted to be realized and recognized as one of the greatest and both had extraordinary careers.”

Despite the passage of seven years, O’Neal believes that James has gotten even better than he was when the two were on the same team together:

“He’s stronger, he’s lighter,” O’Neal said. “He’s more in tune because before you get a championship you don’t know what to do. Nobody knows what to do. And then when you finally get it you say OK, this is what I gotta do. So he went away a couple years to Miami, figured out the blueprint. Came back here, got the supporting cast he needed. Got the coach he needed and bam, there you have it.”

While O’Neal realizes that the Golden State Warriors present one of the biggest challenges of James’ career, he doesn’t appear to share the belief that the Warriors’ status as heavy favorites virtually gives them the NBA title:

“They were favored last year and they were up 3-1,” O’Neal said. “It’s going to be a great series. Golden State’s tough — they added a super addition in Kevin Durant. But, they’re not invincible, nobody is.”

O’Neal definitely has a rooting interest in these Finals and is well aware that he’s witnessing a rare player:

“He’s always been a joy to watch,” O’Neal said. “He passed Jordan for the leading playoff scorer in history, which I thought was hard to do. Now, once you get one or two (championships), you just try to add them on before your time is up. He has three? Hopefully he can get four this year.”

The Cavaliers will tip off for Game 1 at Golden State on Thursday night, just after 9 p.m. ET. Following another road game on Sunday night, the series shifts to Cleveland for games on June 7 and 9.