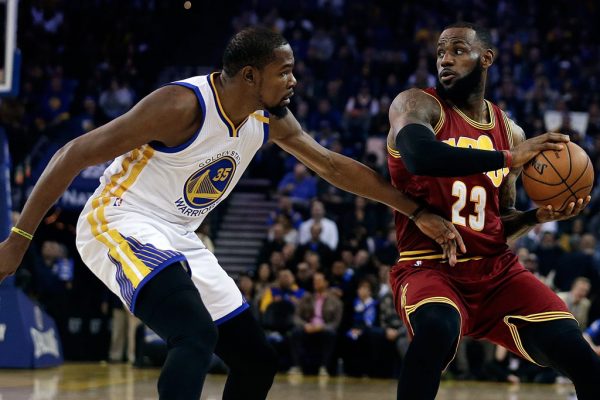 Despite their status as defending NBA champions, the Cleveland Cavaliers are listed as heavy underdogs in their NBA Finals matchup against the Golden State Warriors. That’s evident from the odds on the series, with wagering on which player will be selected Finals Most Valuable Player also indicating a strong lean toward the Warriors.

On Wednesday, the sportsbook at Station Casinos in Las Vegas opened the Warriors as -220 favorites to win it all, with enough early bettors wagering on Golden State that the odds soon moved to -300.

The offering of odds on the NBA Finals MVP is a new wrinkle that only became legal this year. Despite the fact that the Cavs’ LeBron James has won this honor three times, he finds himself in third place among the options. The Warriors’ Kevin Durant tops the list at 7-5, followed by his teammate Stephen Curry at 8-5. James is then next at 2-1, followed by another Warriors player, Draymond Green, at 17-2. In contrast to James’ award-winning performances in the past, none of those three Warriors have ever won the award.

Some Cavaliers players are listed among the remaining group, though the expectation is that they’re either unlikely or long shots to win Finals MVP honors:

The NBA Finals gets underway next Thursday, June 1, with tipoff set for just after 9 p.m. ET. Game 2 will be played three nights later, followed by games in Cleveland on June 7 and 9.