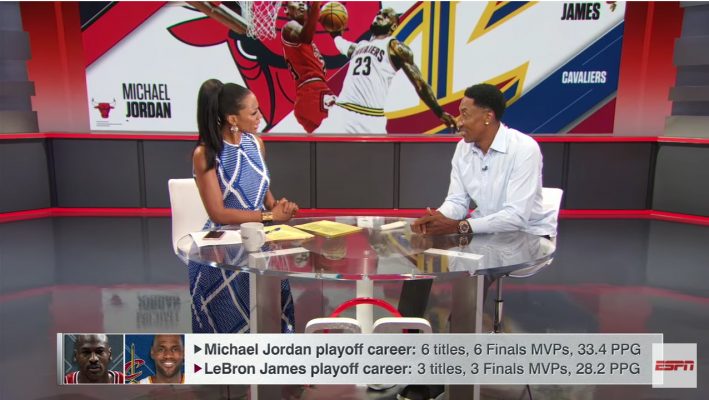 At one point in 2011, he was claiming that Cleveland Cavaliers superstar LeBron James was a better all-around player than Bulls legend Michael Jordan:

“Michael Jordan is probably the greatest scorer to play the game,” Pippen said on ESPN Radio in 2011. “But I may go as far as to say LeBron James may be the greatest player to ever play the game because he is so potent offensively that not only can he score at will but he keeps everybody involved.

“You have to be on your P’s and Q’s on defense. No guy on the basketball court is a threat to score with LeBron James out there. Not only will LeBron dominate from the offensive end as well, but he’s also doing it on the defensive end, which really makes him the complete package. He’s able to get in those passing lanes, shoot those gaps and create transition opportunities where he is pretty much unstoppable.”

Fast forward six years later, and it looks like Pippen has completely changed his tune, as he told Cari Champion during an appearance on ESPN that not only does he think Jordan is better than James, but also that Los Angeles Lakers shooting guard Kobe Bryant is better as well:

“I don’t think he’s (LeBron) surpassed Kobe at all, no,” Pippen said. “And I don’t think he (LeBron) should be compared to either of those players (Jordan or Bryant), because they play different positions.

Pippen may not be a numbers guy, but when looking at scoring from any perspective, his reasoning proves to be faulty as James has proven to not only be an elite scorer, but one of the greatest in regular-season and playoff history. It just so happens that he does other things at a mastery level as well.

But when looking at purely scoring, James has already passed Bryant’s playoff scoring total in less games (5,960 in 211 games vs. 5,640 in 220 games). Not only that, but James also has a higher career scoring average (27.1) than Bryant (25.0), while also scoring with greater efficiency throughout his career (50.1 percent vs. 44.7 percent). So why does Pippen feel like people can’t compare James to Jordan or Bryant?

Is it because James does other things so well in addition to scoring? Is it because he may be feeling the heat from when he claimed James to be a better all-around player than Jordan back in 2011 and is trying to bury that statement as deep as possible? One thing we know for sure, when it comes to putting the ball in the basket, James has proven to be better than Bryant no matter how you look at it and is right on the heels of Jordan.