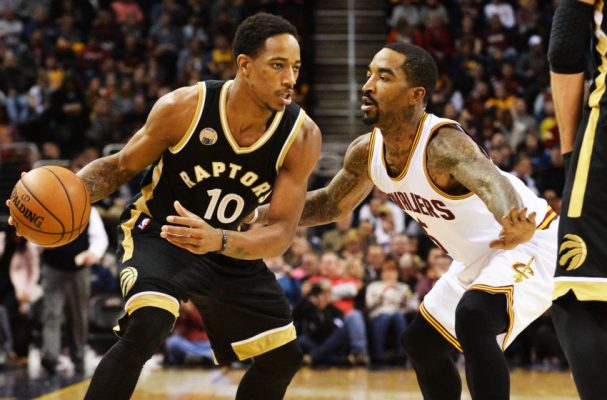 The perception of Cleveland Cavaliers shooting guard J.R. Smith within the NBA and beyond is that of a streaky shooter who goes by the nickname of Swish. However, the evolution of his game now includes delivering as a defensive stopper, which has allowed both teammate LeBron James and the Cavs as a whole to flourish in this postseason.

The best evidence of Smith’s current defensive prowess comes in looking at the offensive numbers of his counterpart on the Toronto Raptors, DeMar DeRozan. For example, in Wednesday night’s Game 2, DeRozan missed all nine of his shots from the field during the first three quarters and finished with just five points.

During the first two games of the Eastern Conference semifinals, DeRozan has been limited to just 33.3 percent (9-of-27) shooting and 12.0 points per game. That’s a steep drop from his regular season numbers of 46.7 percent shooting and 27.3 points per game. In addition, DeRozan has only gotten to the foul line eight times in the two games, compared to the 8.3 times per game he averaged in the first round.

Smith’s value on defense actually dates back to the previous series, when he was responsible for trying to handle the Indiana Pacers’ Paul George. Cleveland head coach Tyronn Lue said that Smith’s work has played a major part in lessening the workload of James:

“I really challenged J.R., especially with Paul George, of just saying that, ‘You have the assignment of guarding Paul George, and we’re going to [let] LeBron roam. He’s going to guard him throughout the course of the game and the course of the series, but you have the responsibility,'” Lue said. “By doing that, it’s given Bron a chance to play extended minutes and being able to roam and play fast and play with a pace. Like I said, you’ve got to give credit to J.R.”

Lue also noted that Smith’s confidence on the defensive front has continued to grow:

James himself is appreciative of the effort, knowing the formidable challenges that Smith has faced. That work has allowed James to put up playoff averages of 34.2 points, 9.2 rebounds and 7.3 assists per game.

“That’s two of the best 2-guards we have, especially in the Eastern Conference, if not the whole league,” James said of Smith’s task of shifting from George to DeRozan. “He’s accepted the challenge. We’ve tried to just communicate on the back line of defense, second and third of the defense. Just let him know that we’re protecting him or what’s coming up or what’s going on behind him. He’s taking the challenge, so we just want to continue to do that.

“J.R. definitely made himself into a two-way player. We said it all last year, said it in the offseason, and because of injuries, he didn’t get much of a rhythm for the regular season. But I feel like he’s back in form where he left off last year in the postseason.”

Smith’s partner in the backcourt, Kyrie Irving, noted that Smith is sacrificing his first love, shooting, for the good of the team:

“He doesn’t necessarily get to shoot as much as I think he would like,” said Irving, “but he’s been very locked in from the day we started working on our schemes for the Raptors.”

After six postseason games, the Cavaliers have yet to taste defeat. They still need two more victories in the Toronto series to move on to the Eastern Conference Finals and 10 overall to capture their second consecutive NBA title. To do that, Smith will need to continue to maintain his level of performance in a role he appears to be getting more comfortable in with each passing game.