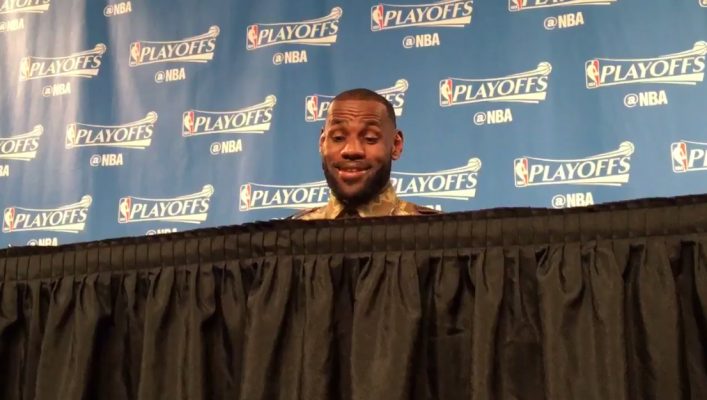 With two minutes remaining in the Cleveland Cavaliers’ Game 1 victory over the Toronto Raptors and the game essentially over, Dahntay Jones and several other reserves checked in for the Cavs.

Although the game was already decided, Jones didn’t seem to care as he threw down an exuberant dunk in the closing seconds of the game. Apparently some tempers flared, as Jones had some words for Raptors center Jakob Poeltl after the dunk.

The back-and-forth between the two resulted in a double technical being called, however Jones didn’t stop there. With 18.7 seconds left to play, Jones continued to go after Poeltl and was subsequently ejected.

Because of this, Jones is expected to pay $6,000 in fine money, but teammate LeBron James said after the game he was going to pay the fine along with a comical warning to Jones:

LeBron said that he'll be taking care of Dahntay Jones' fine, but said too that Jones needs to stop getting ejected against Toronto. pic.twitter.com/esP6DTkEoe

“I told him tonight, ‘Now listen, Dahntay. Enough is enough,’” James said, laughing. “‘You gonna stop getting kicked out against Toronto all the time, all right? So I can stop paying your damn fines.’ But he won’t have to worry about [paying the fine]. He’s good.”