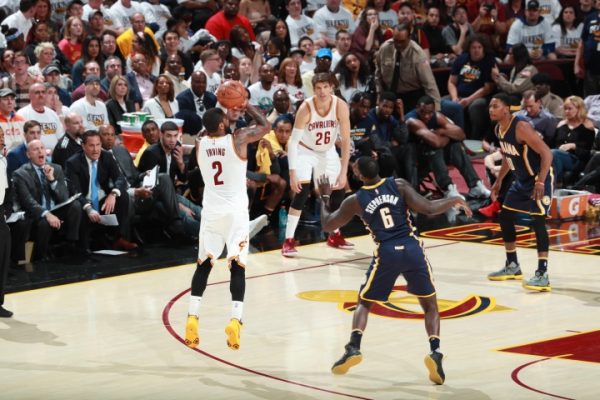 (Cleveland, OH) – The Big 3 of Kyrie Irving, Kevin Love and LeBron James combined for 89 points and helped the Cleveland Cavaliers hold on for a 117-111 win over the Indiana Pacers in Game 2 of the Eastern Conference quarterfinals at Quicken Loans Arena on Monday night.

The Cavs had watched an 18-point lead at the start of the fourth quarter nearly disappear before finally putting away the game. The victory helped give the Cavaliers a 2-0 lead in their series, which is a good omen for the team. That’s because the Cavs have a 12-0 record in series when taking a 2-0 lead in the postseason.

That final quarter served as a rollercoaster that began with Indiana notching the first seven points in the opening two minutes of the final period, but with six minutes left in the game, Cleveland built the lead back up to 15 at 109-94.

Over the next four minutes, the Pacers then ran off 10 consecutive points to make it a five-point game with 2:28 to go in the contest. They managed to cut that deficit by a point at 113-109 with 19 seconds left, but four free throws in the closing seconds by the Cavaliers helped end the furious comeback.

“We’ve got a chance to do something special, but we can’t keep taking steps back like this,” James said.

Irving led all scorers with 37 points, while Love contributed a double-double with 27 points and 11 rebounds. James also picked up a double-double with 25 points, 10 rebounds, seven assists and four blocks, through he was saddled on the night with eight turnovers. In the rebounding category, Tristan Thompson hauled down 10 boards.

That huge lead to start the fourth quarter had primarily been due to the combination of 23 third-quarter points from Irving and Love. The key stretch came in the latter half of the third quarter. That was when Love scored 10 unanswered points and turned a 79-70 Cavaliers lead into an 89-70 advantage. Then, in the closing moments of the period, Irving capped a 13-point period by connecting on a pair of baskets in the final 30 seconds to give the Cavs a commanding 96-78 lead with one quarter left.

James was asked after the game about Indiana losing composure during the third quarter:

“Our mindset is how to help each other, we can’t worry about if they’re losing their composure,” James said.

Cleveland again suffered through inconsistent play throughout the game, dishing out 19 assists but also committing 18 turnovers.

“We have to take better care of the basketball and just take good shots,” Lue said. “That’s what hurt our defense tonight was our offense.”

During the first half, the Cavaliers shot 60 percent from the field and made 6-of-7 from the free-throw line. They were on the verge of breaking the game open during the second quarter, using a 24-13 run to take their biggest lead of the half at 56-42. However, the Pacers then used a 16-7 run to close the period and whittled the margin to just five points at 63-58.

J.R. Smith missed the entire second half after injuring his left hamstring. That resulted in Iman Shumpert being inserted into his place and seeing his first action of the series.

“Shump was unbelievable. He came in and held Paul George to four points in that fourth quarter,” Lue said. “When it was his turn, he stepped up and did the job. He hit a couple of shots and just brought a tenacity to the court that we needed.”

Irving also spoke about the effort of Shumpert:

“He gave us energy. He was focused and understood the moment, had the right mindset and just executed,” Irving said.

The two teams now head to Indiana for Game 3, which will take place on Thursday night. Tipoff for that clash at Bankers Life Fieldhouse will be just 7 p.m. ET and will be nationally broadcast on TNT.

“We have to do a better job on 50-50 balls. Here, we had our crowd. There, it’s going to be us against everyone,” James said. “We have to be more poised and figure it out.”