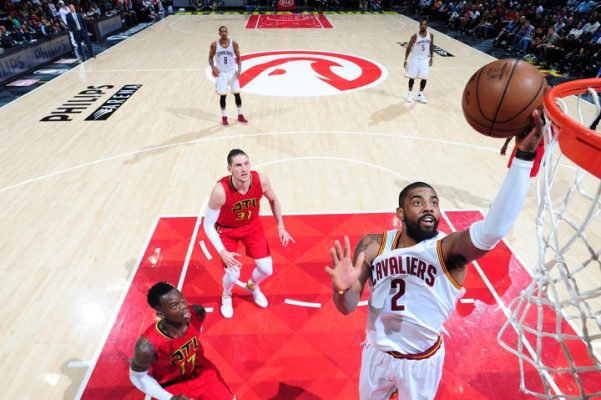 (Atlanta, GA) –The Cleveland Cavaliers watched what had been a 26-point lead to start the fourth quarter completely disappear and then fell apart in the final minute of overtime as they dropped a 126-125 decision to the Atlanta Hawks on Sunday afternoon at Philips Arena.

In the extra session, Atlanta missed its first five shots and committed a turnover, while the Cavs scored the first five points. However, the Hawks answered back with seven straight points before LeBron James fouled out with 1:52 left.

After Kyle Korver connected on a 3-pointer with 1:01 left, Kevin Love split a pair of free throws with 42.1 seconds remaining to give the Cavs a 120-118 lead. However, Mike Muscala’s 3-pointer just seven seconds later gave Atlanta the lead, with a bad inbounds pass by Love being quickly converted into a layup for the Hawks. A Kyrie Irving layup was matched by two more Atlanta free throws with 3.6 seconds left to complete the comeback.

“When you give a team like that a life, it usually turns out bad,” Irving said.

For the first three quarters, the Cavs effectively dominated play. However, they were outscored 44-18 in the final period and watched their huge lead drop to just four with 52.6 seconds to go in regulation and then three points with 13 seconds remaining.

“We didn’t get any stops and they went on a 9-0 run to start the quarter. They got their rhythm at that point,” James said. “When you allow teams to stick around, that’s what happens.”

After Irving’s two free throws with 10.4 seconds left pushed the margin back up to five points, Paul Millsap was fouled behind the three-point line and converted with 8.3 seconds left. On the ensuing inbounds play, Irving was tied up, with the Hawks getting the jump and Millsap’s connecting at the buzzer to send the game into overtime.

“For three quarters, we played Cavaliers basketball. In the fourth quarter, we didn’t keep the same intensity when we got stops,” Cleveland head coach Tyronn Lue said. “Everything went wrong for us in that fourth quarter. To be outscored by 26 in one quarter should never happen.”

A frustrated James spoke about the jump ball in the final 10 seconds:

“The ref told me I couldn’t call timeout,” James said. “I’ve never heard that before.”

An equally irritated Irving spoke about the call, though he pointed out that the Cavs never should have been in that position:

“How much is the fine for talking about the refs? 50 (thousand)? 25 (thousand)? Not worth it,” Irving said. “But that wasn’t what extended the game.”

Irving led all scorers with 45 points and also handed out nine assists, while James collected a triple-double with 32 points, 16 rebounds and 10 assists. Meanwhile, Love had a double-double with 11 points and 15 boards, while Channing Frye contributed 12 points and eight rebounds.

“I’m not discouraged. It was a tough loss for us, but that’s the way the game goes,” Lue said.

The crushing loss now puts the Cavaliers in a tie with the Boston Celtics for the top seed in the Eastern Conference with two games left to play in the regular season. The Cavaliers now have to look to break a frustrating 12-game losing streak that dates back to the 2010-11 season with a road game at Miami on Monday night. Tipoff for that contest will be shortly after 7:30 p.m.

“For me, it’s never been about getting the number one seed, it’s playing the best possible basketball” James said.