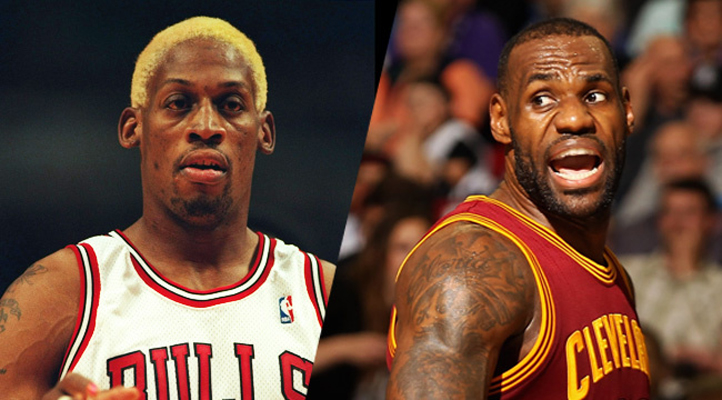 The idea of sitting out Cleveland Cavaliers forward LeBron James in regular season games has been a source of controversy all season long, even though other teams have followed the same practice with no ensuing criticism. The latest person to join that list of critics is an NBA Hall of Famer who’s never been known to maintain his composure.

That former player is Dennis Rodman, who added some earthy language during the course of an interview with CBS Sports on Tuesday. One of Rodman’s former teammates was the legendary Michael Jordan, whose name was invoked during the rant:

“You know what, LeBron’s doing one thing that I always said that Michael Jordan never did,” Rodman said. “He never rested. He played every game. He played every game. LeBron has the position to do this now because they need him. The league needs him, that’s why he’s doing all this crazy s— now like bitching and complaining and all this [BS].”

“It’s very easy to do what they define greatness [as now] — Michael Jordan did it when it was tough, really tough. And what’d he do? Lead the league in scoring 10 years in a row. Ten years in a row, he led the league in scoring. Ten years in a row, back then, that was hard. Averaged like 32 points a game. That was hard back then. Now it’s easy. All these [expletive] triple-doubles … back then when he was getting his ass whooped, I mean beat down every game, and then when he played against us [the Detroit Pistons], he said — guess what — ‘I gotta go back in the gym.’ And he got tough. He got tough and he got great. And greater. So, that’s it.”

One glaring inaccuracy in Rodman’s comment is the simple fact that Jordan never played 10 seasons in a row, retiring three different times. Over that period (1984-2003), Jordan missed the equivalent of five full NBA seasons.

James and Jordan each have something in common in the fact that it took them a number of years before they were able to win an NBA title. During his career, Jordan’s teams won six championships and James is currently seeking his fourth title. The idea of James resting during the course of the season is the Cavaliers’ way of reserving enough energy for James in order to reach the finals for the seventh straight year, something Jordan never did.

Rodman’s controversial comments have long been based more on emotion than facts, which means that these remarks are likely to filed and forgotten, especially by James.