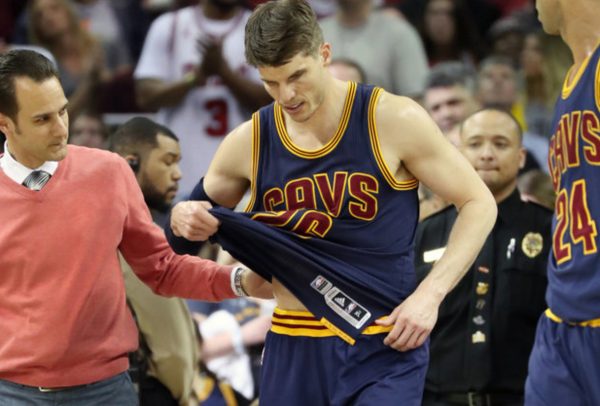 Cleveland Cavaliers shooting guard Kyle Korver could potentially be out of action for another week with a sore right foot. The issue is one that’s caused him to miss the team’s last two games and has been bothering him since approximately the time of the All-Star break.

The soon-to-be 36-year-old Korver underwent an MRI on the foot last week, with the nagging problem being diagnosed as tendon inflammation. The issue became worse during the team’s pair of games against the Miami Heat, according to Joe Vardon of Cleveland.com, with Korver playing just 20 minutes in last Monday night’s loss. In that game, he missed five of his seven shot attempts, continuing a problem that’s seen him connect on just 32 percent of his shots over his past four games.

Since being traded from the Atlanta Hawks to the Cavaliers on Jan. 7, Korver has seen action in 26 games, starting one contest. Playing nearly 26 minutes per game, Korver has averaged 11.1 points and 2.8 rebounds. His three-point average of 48.7 percent for the Cavs rivals the best numbers of his career.

The Korver injury is just the latest injury that Cleveland has had to deal with this season, with the team having just welcomed back another shooting guard, J.R. Smith, after he had missed nearly three months due to a fractured thumb. In addition, starting power forward Kevin Love is still recovering from a knee injury and their newest addition, Andrew Bogut, saw his Cavaliers career end after one minute of action after he had fractured his tibia.

The timetable of not playing for another week is based on Korver’s past history with the issue, with the Cavaliers set to re-evaluate his status within a few days. The team is completing a three-game road trip on Sunday night and will return home for two contests before beginning a four-game road swing, primarily against Western Conference opponents.