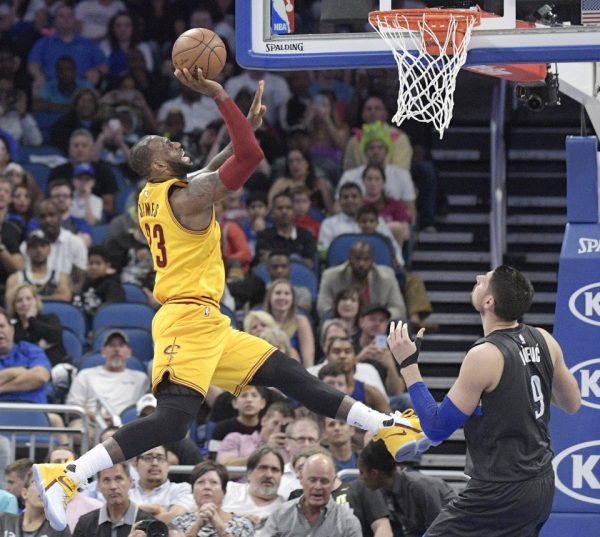 (Orlando, FL) – Seven different players scoring in double figures helped the Cleveland Cavaliers put an end to their frustrating three-game losing streak as they knocked off the Orlando Magic with a methodical 116-104 victory at Amway Center on Saturday night.

Among that group of players was LeBron James, who collected his second consecutive triple-double, with a game-high 24 points, 13 assists and 12 rebounds. The performance was the 51st time in his career that he’s accomplished that achievement and the fifth time that he’s been able to do it in back-to-back games. For good measure, it’s the fourth time he’s collected a triple-double in his last seven games.

“For me I’ve just always tried to turn it back at the All-Star break. Just put our team in position to win as many games as we can and try and keep myself in a good flow,” James said about his continued success. “The best thing about what I’m doing right now is that I’m very efficient. I’m able to have a triple-double on just 14 shots. That lets me know that I’m getting my teammates involved, I’m staying locked in, just being very efficient with the game plan. That’s what makes me proud more than anything.”

The Cavaliers were never able to take charge until the final moments, though they were able to hold the lead for most of the second half. With 7:35 remaining in the game, Cleveland was holding onto a 95-92 lead before then going on a 21-10 run to put the game away.

“It was a good win for us,” Cavaliers head coach Tyronn Lue said. “We had good defense in spurts, and on offense, we were sharing the ball.”

Right behind James on the scoresheet was Kyrie Irving, who added 22 points, eight rebounds and seven of the team’s 30 assists on the night. Meanwhile, Tristan Thompson acquired a double-double by halftime and ended his night with 14 points and 13 boards.

“Obviously, we had to come out and execute,” Irving said. “I was just trying to be all around the floor. We have to have that killer mindset and don’t take our foot off the gas pedal.”

Perhaps the most welcome sights from one of those double figures scorers was the effort of J.R. Smith, who came off the bench to score 11 points, including a trio of 3-pointers during the third quarter. Iman Shumpert added 15, with 10 of those coming in the opening quarter, which allowed the Cavs to keep pace in the early going.

Rounding out the double-figure brigade was Channing Frye with 12 and Deron Williams, who also dished out four assists to go along with his 10 points.

“I thought we stuck together,” Frye said. “I thought that we got flow with that second unit and that’s going to be huge.”

Defending the 3-pointer was also a key to the game as Orlando managed to hit just 4-of-21 from long-range.

“We did a great job in that area,” James said. “The biggest problem we’ve had is defending the three-point line and tonight, we were able to do that.”

This rough three-game road trip concludes on Sunday night when the Cavaliers travel to Houston to face the Rockets in a game that will be nationally broadcast on ESPN. Back on Nov. 1, the two teams met in a shootout as the Cavaliers won by a 128-120 score, though they were unable to keep the Rockets’ James Harden in check with 41 points and 15 assists. Tipoff for Sunday night’s matchup will be just after 9 p.m. ET.