Stephen Curry, Among Others Say Kyrie Irving Has Best Handles in NBA 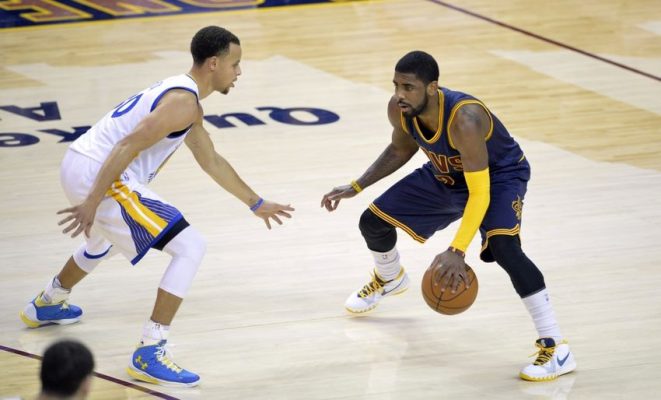 The ability of Cleveland Cavaliers point guard Kyrie Irving to handle the basketball in all sorts of situations is one reason that’s he’s at or near the top when any discussion of the top players at his position takes place. It also bolsters the reasoning behind Irving being the top pick in the 2011 NBA Draft.

Irving’s stature within the league was noted by The Undefeated, which quoted a number of different players who all raved about the soon-to-be 26-year-old’s ball-handling ability.

“Kyrie has the best handle of all time,” said Houston’s Eric Gordon. “Very creative and uses different motions, as well.”

More effusive in his praise was someone who has to face Irving much more frequently, Atlanta’s Paul Millsap:

“Hands down, Kyrie has the best ball-handling skills that we have in our league,” Millsap said. “The way he reads defenses, the way he reads your feet, it’s unbelievable … His biggest asset is his creativity. He is one of the most creative point guards we have.”

Irving’s most memorable ball-handling took place last June in Game 7 of the NBA Finals, which preceded his iconic game-winning 3-pointer. The player who was the victim of Irving’s clutch play, Stephen Curry, offered his own praise:

“He is able to use both hands and he’s shifty and crafty,” Curry said. “He changes speeds to keep people off-balance. Perhaps the best way to put it into words, he has an uncanny kind of ability to go one way, stop on a dime, right to left, left to right, whichever, and still be on balance and get by you. It’s unpredictable. You just don’t know which way he is going.”

Irving’s ability in this area doesn’t come without frequent work that often takes place before and after the team’s practices and prior to the team’s games.

“A ton of practice, but also having an imagination that is sometimes out of my world,” Irving said. “You try things in practice in a solo session seeing defenders, putting myself in a situation that I can be able to execute in the game.”

That pre-game work generally takes place an hour before tipoff, with Irving working with assistant coach Phil Handy on 10-to-12 minutes worth of dribbling and shooting.

“There is creativity that goes into it, meaning to change on the fly with multiple combinations, multiple moves, being able to turn my practice into my work and really just have some fun out there,” Irving said. “Being able to keep your defender in an unpredictable state is always a fun thing because you can dribble, shoot, pass … You’re able to not only make plays for yourself, but for everyone on the court.”

In his six years in the NBA, Irving has elevated his game to among the elite and has the work ethic in place to maintain that level of success.