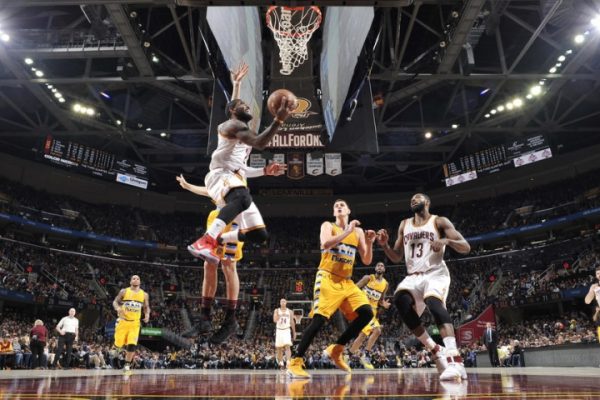 (Cleveland, OH) – A total defensive shutdown during the first five minutes of the second half helped the Cleveland Cavaliers blow open their game against the Denver Nuggets and come away with a 125-109 victory at Quicken Loans Arena on Saturday night.

Denver missed its first seven shots of the third quarter and by the time it connected on a 3-pointer with 6:59 left in the period, Cleveland had scored 18 unanswered points. That turned a 59-55 Cavaliers halftime lead into a 77-55 advantage, though the Nuggets were able to get their deficit down to 14 at 92-78 by the time the period had ended.

“[We were] getting stops and getting out in transition,” Cavs head coach Tyronn Lue said. “LeBron (James) did a great job of getting into the paint, making the right play, making the right pass. Kevin (Love) knocked down a couple, Kyrie (Irving) knocked down a couple. Our three-ball got going in that third quarter and it really opened up the game for us.”

Denver continued to chip away at the lead during the fourth quarter and had a chance to get the margin below 10 points with six minutes left in the game. However, they missed three attempts and Cleveland’s 9-2 run officially put the game away.

“They got off to a good start early, but then we came out with more energy,” Lue said. “We switched some things and were able to stop their offense”

Following a bumpy first quarter on defense in which the Nuggets had hit on 57 percent from the field, they were held to just 36 percent in the department over the final three quarters. For the Cavaliers, they dished out 30 assists on the night and hit 15 3-pointers at a rate of 50 percent. They cooled off from the field in the fourth quarter, yet still managed to finish at 55 percent for the game.

Key to that third-quarter surge was a trio of 3-pointers by Irving, with the point guard finishing the night with 27 points and five assists. Matching him in the points category was James, who notched a double-double with 27 points and 12 assists, while also adding five rebounds.

Tristan Thompson also picked up a double-double with 13 points and 12 rebounds, while Love had 16 points and eight rebounds. Kyle Korver ended the evening with 14 points and five rebounds.

Both teams took a leisurely approach on the defensive end during the first quarter, with the Nuggets starting off in more aggressive fashion, holding a 12-6 edge on the boards and drilling five 3-pointers. Their 10-0 run in the latter portion of the period helped them take a 33-28 lead into the second quarter.

The Cavaliers tightened things up on defense by limiting the Nuggets to 22 points in the second quarter. However, the Nuggets still remained close because they of how they dominated on the offensive side of the glass, holding a 10-2 edge in the quarter, though the Cavs had good ball movement with nine assists, helping them hold a 59-55 lead at intermission.

The slow start was a byproduct of this contest being the Cavaliers’ first home game following a four-game road trip. James spoke about the difficulty of getting going under such circumstances:

“The energy levels are always different,” James said. “It’s always hard to get that energy going in the first game back.”

One of the things that had sparked Cleveland was starting the second quarter with a big lineup. Lue indicated that this particular strategic move may continue:

“I have to figure how to get LeBron the ball in those spots without him having to bring the ball up,” Lue said.

The Cavaliers finish up play before the All-Star break with back-to-back games beginning on Tuesday night. That first contest will be in Minnesota to face the Timberwolves in a game set to tip off just after 8 p.m. ET, and will be followed by a home contest against the Indiana Pacers on Wednesday night.