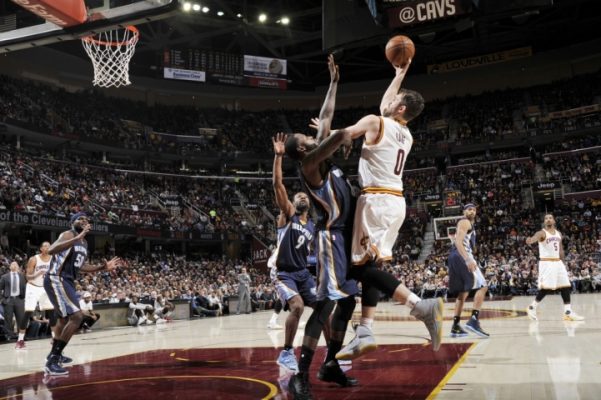 (Cleveland, OH) – A slightly different Big 3 combined for 75 points on Tuesday night and helped lead the Cleveland Cavaliers to their fifth straight win in a 103-86 victory over the Memphis Grizzlies at Quicken Loans Arena.

Kevin Love contributed a game-high 29 points and collected another double-double with 13 rebounds. Meanwhile, LeBron James and J.R. Smith each tossed in 23 apiece, with Smith’s contributions marking his season-high in that category. James also handed out eight assists and grabbed six rebounds.

“I felt like I was getting back to myself tonight,” Smith said after the game.

The win itself wasn’t an artistic masterpiece, with the final score not indicative of the fact that Memphis only trailed by nine at 83-74 with 6:37 left. From that point, Cleveland put together a 16-4 run to put the game away.

“We got some stops and then some points out of transition,” Cavs head coach Tyronn Lue said in his postgame press conference.

Two issues that allowed the Grizzlies to stay in the game were the cold shooting by the Cavaliers during the third quarter and the 16 turnovers they committed. However, they did manage to improve their season record to 18-5.

“They’ve always been a team that plays hard, especially when they’re undermanned,” Smith said. “So we knew not to take them lightly.”

Both teams were missing key pieces of their lineup, with Cleveland sitting out Kyrie Irving in order to give him a rest and Memphis doing the same with Marc Gasol. The Grizzlies also remained without the services of Mike Conley, who’s still recovering from a broken bone in his back. The Cavs did have the welcome return of Channing Frye, who scored eight points in 14 minutes of action.

“He wanted to play and I told him to take the game off,” Lue said about Irving.

During the first quarter, the Cavaliers connected on 60 percent of their shots and held a 10-3 edge on the defensive glass. They saved the best for last, going on a 10-2 run in the final 2:30 of the period to take a 32-20 lead.

“We knew they were going to come out and be physical and we knew that we had to match it,” Love said.

The double-digit lead remained during the second quarter, getting up to as many as 22 at 58-36 with just over two minutes left. At that point, it was the Grizzlies that finished the period with a surge of their own, scoring the final seven points to give the Cavs a 15-point advantage at intermission.

Both teams then went ice cold in the third quarter, each only scoring 15 points to keep Cleveland in the lead at 73-58. Until they hit two late 3-pointers, the Cavaliers managed to only hit on 18 percent of their 17 shots, with the Grizzlies’ own struggles keeping them from slicing into their large deficit. With two minutes left, they were only connecting at 25 percent from the field, but managed to hit on two of their last five attempts.

“We got some great looks, we just didn’t get them to go down,” James said

A look at the box score might cause some to think that DeAndre Liggins had a poor night, with just three points to his credit and a 1-for-7 shooting night. However, another strong defensive performance saw him force the Grizzlies into three offensive fouls.

“He’s been great these past four of five games,” Lue said about Liggins. “He got three charges and just his defensive energy picks us up.”

“He’s giving us some grit, he’s willing to do the dirty work,” James said. “He’s earned his position in this league and this team.”

The same two teams will face each other tomorrow night, only this contest will take place at FedExForum in Memphis. Tip-off for that matchup will be just after 8 p.m. ET, though the Cavaliers will face a formidable task with James, Irving and Love all sitting out the game in order to get the trio a rest before Saturday night’s home contest against the Los Angeles Lakers.