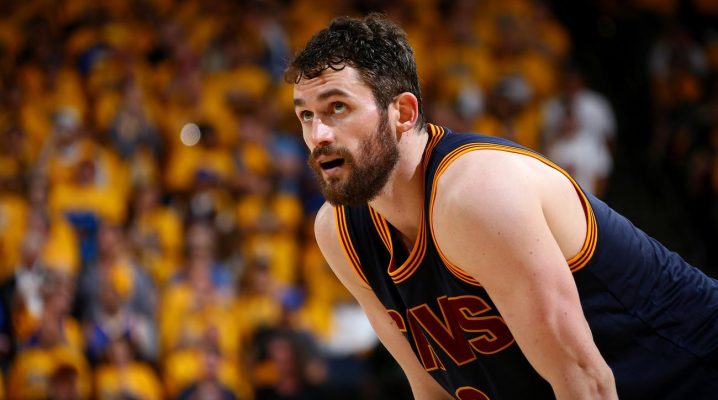 His record-setting 34-point first quarter against the Portland Trail Blazers allowed Kevin Love to capture Eastern Conference Player of the Week honors for the first time since coming to the Cleveland Cavaliers.

But even before scoring more points in the opening period of a game than anyone in NBA history, it became clear that Love had turned a corner and was no longer widely viewed as something of an afterthought compared to LeBron James and Kyrie Irving.

The 6-foot-10 forward is scoring at a 21.8-point clip during the Cavaliers’ blazing 13-3 start. That’s more than five points a game above what Love averaged in both of his first two years in Cleveland and better than the figure of 19.2 points which he posted over six seasons with the Minnesota Timberwolves.

But it’s the number which has gone down that might shed the most light on Love’s resurgence. As prolific as he has been at knocking down 3-pointers, particularly in last week’s victories over the Blazers and the Dallas Mavericks, the percentage of shots attempted from that distance has dropped from 44.9 percent in the championship season of 2015-16 to 38.9 percent this year.

Love told Adam Kilgore of the Washington Post before a Cavs-Wizards game in mid-November that Tyronn Lue, in his first full season as head coach, has made sure to call more plays emphasizing his low-post skills which were so prevalent with the Timberwolves.

“He’s throwing out different lineups, trying to get me more touches closer to the basket,” Love said. “And also, just knowing where we stand with this team, each and every player. He paints a good picture of what guys’ roles are and what we want to get accomplished. I give a lot of credit to him and the coaching staff, just knowing each and every one of his guys and having a better routine.”

When he was acquired during the same summer James returned to Cleveland, Love anticipated being in a more uptempo offense than he was accustomed to and lost some bulk — admitting in hindsight that “I didn’t really look like myself.” Then came the shoulder injury in the first round of the 2015 playoffs which reduced him to the role of spectator in the Cavs’ march to only their second NBA Finals appearance in franchise history.

Now he’s at his typical strength and playing at his preferred weight.

“It’s night and day,” Love said. “Having a full offseason, even after having gone all the way to the Finals, my body feels good.”

Love matched his previous single-game high with the Cavs in the first quarter alone of the 137-125 win over the Blazers. Lue told the Akron Beacon Journal afterward that he tried running a couple of plays early for James coming out of timeouts, but James declined and wanted to keep running plays that got Love looks at the elbow.

Irving’s franchise single-game record of 57 points set in March 2015 at San Antonio seemed well within Love’s reach. But he took just one shot in the second quarter and a total of six for the rest of the game, finishing with a total of 40 points.

As John Schuhmann pointed out Wednesday in a roundtable discussion amongst writers of NBA.com, the increased scoring productivity by both Love and Irving has been to the benefit of a team which at times has leaned on James too much in the past.

Even after Tuesday’s loss in Milwaukee, the Cavs rank third in offensive efficiency and have scored 6.9 points per 100 possessions better than the league average, a much better mark than they had in their previous two seasons (+4.7 and +4.2) or any other season in the last 40 years. Irving is having the most efficient scoring season of his career and James surrounded by shooters is a pick-your-poison situation for every defense.

Love has pulled down at least 10 rebounds in 10 of the Cavs’ last 11 games, including 13 in the 118-101 loss to the Bucks. His 3-of-10 shooting performance was the lowest percentage by him this season and something which he hopes to bounce back from Thursday night against the Los Angeles Clippers.