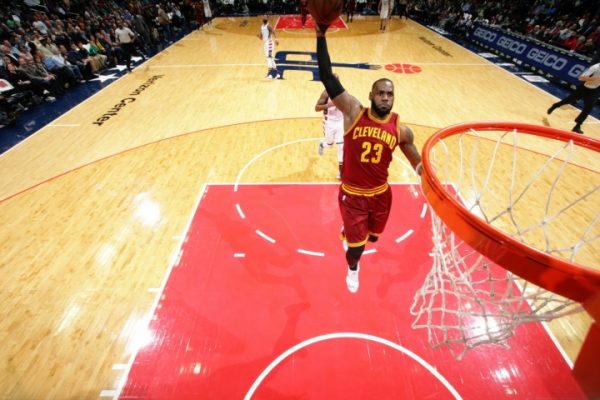 (Washington, DC) – After their visit to the White House on Thursday to see President Barack Obama, the Cleveland Cavaliers (7-1) avenged their first loss of the season with a solid 105-94 road victory over the struggling Washington Wizards (2-6) at Verizon Center on Friday night.

“A lot of guys were humbled by the experience,” Cavs head coach Tyronn Lue said about visiting the White House. “When you get a chance to meet the President of the United States, and he knows your first name and last name, and knows your stats and how you play and who you are as a person, it just means a lot.”

Superstar small forward LeBron James became the youngest player in NBA history to surpass 27,000 points as he went off for 27 points (9-of-18 from the field), 10 rebounds, five assists, two steals and two blocked shots in 38 minutes of action.

James, who is currently 31 years and 317 days old, broke legendary Los Angeles Lakers shooting guard Kobe Bryant’s record that was set at the age of 32 years and 160 days old.

The Cavs had four players score in double figures on the night, which was just enough to give Cleveland an important road win on Friday.

“On the road, it’s just us. We’ve got to come together, play as a team and be as one,” coach Lue said after the game. “These guys have a close-knit group and they come together.”

All-Star point guard Kyrie Irving led all scorers will 29 points and six assists, while shooting guard J.R. Smith (5-of-9 from three-point range and four rebounds) and power forward Kevin Love (a game-high 16 boards in 34 minutes) scored 17 and 14 points respectively on the night.

“I just took it upon myself to really be physical when I came out in the second quarter. We came out kind of lackadaisical, and our effort over the last few games on the defensive end hasn’t always been there. We have to have more consistency if we want to continue to be great,” Irving said after the victory.

It was a two-man show for the Wizards, who were without the services of shooting guard Bradley Beal due to stiffness in his hamstring, as All-Star point guard John Wall’s 28 points and three assists to go along with power forward Markieff Morris’ 20 points and five boards were all Washington had going for them on the night.

Washington small forward Otto Porter Jr., who recently had a career-high 34 points in a 118-93 beatdown victory over the Boston Celtics on Wednesday, finished with 11 points, eight rebounds and five assists.

The Cavs will return home on Sunday to take on the upstart Charlotte Hornets (6-2) at Quicken Loans Arena. The contest, which is scheduled to tip off shortly after 3:30 p.m. ET, will be broadcast live locally on Fox Sports Ohio.