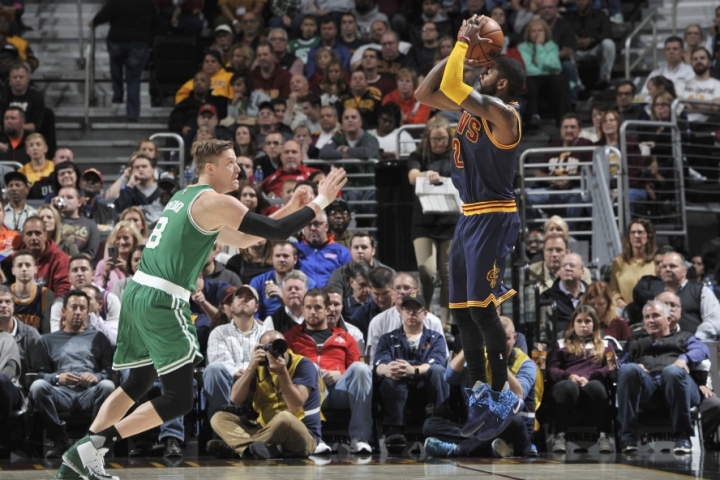 (Cleveland, OH) – Needing a combined 79 points from their Big 3, the Cleveland Cavaliers improved to 5-0 on the year as they held on for a closer-than-expected 128-122 victory over the Boston Celtics at Quicken Loans Arena on Thursday night.

LeBron James had a team-high 30 points and collected a double-double with 12 assists, while Kevin Love contributed 26 points and eight boards, with 12 of those points coming at the free-throw line. Kyrie Irving rounded out the trio with 23 points, six assists and four rebounds.

What had been a 100-83 Cavaliers lead to start the fourth quarter turned into a dicey situation as the Celtics used a 19-7 run to reduce their deficit to just five points at 107-102 with 6:17 left. That would be as close as the game got, though Boston remained competitive until the final buzzer.

In addition to the trio above, Tristan Thompson had a strong night with his own double-double with 15 points and 14 rebounds. Two other Cavs players also finished in double figures, with Iman Shumpert notching 15 and Channing Frye tossing in 11 on the night.

Boston was playing short-handed with Jae Crowder sitting out the game after spraining an ankle on Wednesday night and Al Horford currently in the NBA’s concussion protocol.

Cleveland head coach Tyronn Lue was happy with the offensive output, but called out a specific facet of the team’s defense on the night.

At the start of the game, the first 10 minutes of action saw both teams effectively match each other on the scoreboard. However, in those closing minutes, the Cavaliers made their first move toward taking control of the game, closing with a 9-2 run to take a 36-25 lead.

Boston chopped that 11-point deficit down to five with 8:41 left before halftime, but that would be as close as they got until the fourth-quarter push. A 20-7 surge by the Cavs gave them the first of two 18-point advantages in the second quarter at 60-42. By the time the horn sounded for intermission, Cleveland remained comfortably in front at 68-51.

The keys for the Cavaliers’ offense during the opening quarters was a combination of solid ball movement and long-range shooting. The Cavs handed out 16 assists, half of them from James, while connecting at a 61 percent rate on their three-point attempts.

James scored the first basket of the second half to give Cleveland their biggest lead of the game, but the Celtics kept chipping away for the remainder of the quarter. Twice getting within 11, Boston watched the Cavaliers run off eight unanswered points in the closing two minutes and take their 17-point lead into the final quarter.

The Cavaliers head to Philadelphia for a Saturday night matchup that’s scheduled to tip off just after 7 p.m. ET at Wells Fargo Center. James will be in position to become the NBA’s 10th all-time leading scorer, since he enters the game just two points behind Hakeem Olajuwon’s 26,946 points.