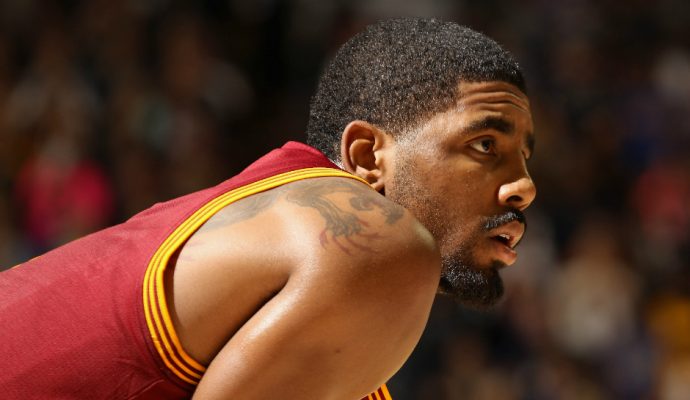 (Cleveland, OH) – A pair of three-pointers in the final 68 seconds helped the Cleveland Cavaliers finally shake off a pesky Houston Rockets squad as they improved to 4-0 on the year with a 128-120 victory at Quicken Loans Arena on Tuesday night.

Cleveland had led by only three at 119-116 with 1:08 to go before J.R. Smith drilled a three-pointer. That was followed by a Kyrie Irving three with 34.6 seconds to play that clinched the game. During that final period, the team established a new team record by connecting on 13-of-15 (87 percent) of their field-goal attempts.

Irving gave credit to the front office when speaking about the team’s torrid fourth-quarter shooting.

“That’s thanks to Griff (general manager David Griffin) for getting the guys here who can put the ball in the basket,” Irving said.

The Cavs had looked like they had taken control of the game after scoring nine points in a 39-second span midway through the fourth quarter, but that wasn’t enough to snuff out Houston’s hopes.

At that point, the Cavaliers had held a 96-95 lead before the points explosion began with a three-pointer by Iman Shumpert, followed 18 seconds later by another three from Mike Dunleavy. Then with 6:06 to go in the game, Kevin Love was fouled in the act of taking another three-pointer and connected on his trio of free throws to make it 105-95. However, the Rockets battled back to get to as close as two with 2:18 left.

“We scored 128 points, but we didn’t play fast enough for me,” Lue said. “That’s when guys get open shots.”

Irving led the Cavs with 32 points and four assists and was joined by Love with 24 points and five rebounds. Meanwhile, James collected another double-double with 19 points and 13 rebounds, while also contributing eight assists.

James was again very complimentary towards the effort of Irving.

Others who broke the double-figure barrier in scoring for Cleveland included Smith with 15, and the duo of Dunleavy and Channing Frye, who each chipped in with 11 points. On the rebounding front, Tristan Thompson corralled 10 on the evening.

“Our defense isn’t necessarily tailored to handle a team like that,” Irving said. “It’s a good thing we have the personnel to handle it.”

Speaking about the difficulty in facing the Rockets, Lue spoke about his only goal.

“They put you in a lot of uncomfortable positions,” Lue said. “But my main goal was just to get a win.”

The Cavs will stay at home for a Thursday night matchup against the Boston Celtics, with tip-off set for just after 8 p.m. E/T.