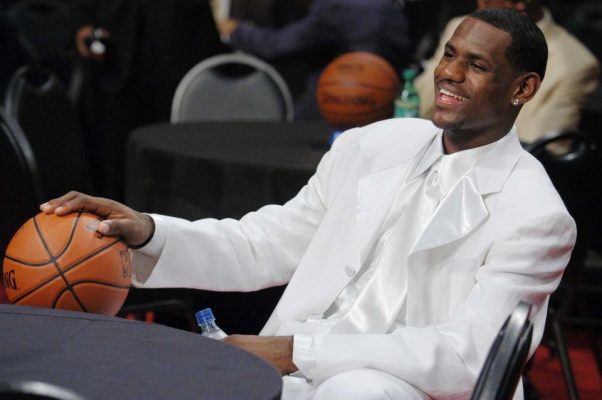 The connection between LeBron James and the Cleveland Cavaliers, with the exception of a four-year hiatus between 2010 and 2014, has been in place since 2003. However, according to Brian Windhorst of ESPN, James wasn’t terribly enamored with wearing a Cavaliers uniform prior to being drafted by the team in 2003.

“When James was a teenager, he started attending games at the arena, and he couldn’t believe how bad the Cavs were, how empty the arena often was, with its bright blue seats seeming like a neon sign of disinterest,” said Windhorst. “During his senior year of high school, he went to several games, was given courtside seats and visited the locker room. His thought was pretty clear after he watched that 17-win team with the lowest attendance in the league: They were awful, and he didn’t want to be a part of it.”

During that rookie season, James’ first professional head coach, Paul Silas, offered him a backhanded compliment. While in Boston, Silas showed James the two championship banners that the Celtics had won during his time with the team, before offering an odd comment:

“You’ll get one of them someday,” Silas said. “But you’ll never be better than I was!”

James didn’t end up winning a championship during his first stint with Cleveland and during his first season as a member of the Miami Heat, the team’s head coach Erik Spoelstra, used the Heat’s 2006 championship trophy as a source of motivation. Although they came up two games short in that first season, James and the Heat eventually won back-to-back titles in 2012 and 2013.

After returning to Cleveland, he used a similar motivating tactic with teammates Kyrie Irving and Kevin Love. Neither they nor the Cavaliers had ever won a title, so James showed them his two championship rings.

That tactic was short-circuited by season-ending injuries to both Love and Irving, but last season, the ultimate goal was achieved. Last Tuesday night, the Cavs’ first championship banner was pulled to the rafters of Quicken Loans Arena.

“It means so much to me for my own personal goals,” James said. “And I know it means a lot to everyone in Northeast Ohio and anyone who has anything to do with Cleveland sports history.”

A full decade earlier, James had been struck by the scarcity of banners recognizing the franchise’s success. The only one present was one acknowledging the “Miracle of Richfield” season in 1975-76, when the team had reached the Eastern Conference Finals.

“Man, we’ve just got to start putting some banners up there,” James said at the time.

cleveland cavaliersErik Spoelstrafeaturedkevin lovekyrie irvinglebron jamesnews tickerPaul Silas
← Previous Story Andre Iguodala on ‘The Block’: ‘That S— Was So Dope to Me, That S— Was Amazing’
Next Story → Kyrie Irving to Have Epic Nike Banner Hung Near Quicken Loans Arena