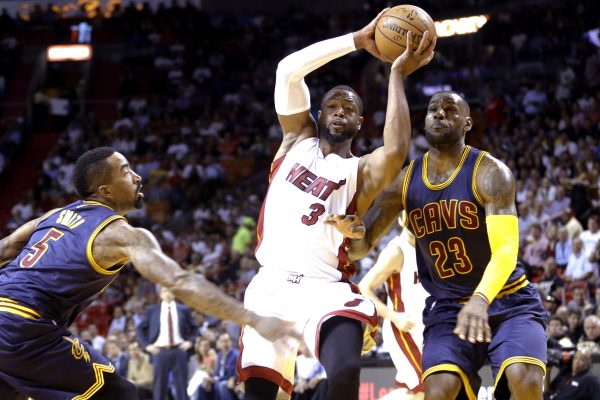 After a summer filled with turmoil for Dwyane Wade, between himself and the Miami Heat front office, the 13-year veteran decided to find a different home during free agency, ultimately opting to join the Chicago Bulls.

The decision was not an easy one for Wade, and according to recent reports from CBSSports.com, it seems as though Wade contemplated a reunion with former Miami Heat teammate LeBron James.

According to an interview with SLAM, Wade did not join the Cleveland Cavaliers this summer based on the current roster construction and the way he would fit into that mold.

“For me, it’s as simple as, I got a deal in Miami for $41 million. I got a deal in Chicago for $47 million,” said Wade. “It didn’t come down to the money. I thought about Cleveland, but I didn’t fit there. You don’t just do something because, oh, I could win a ring there. I have three rings. I don’t need to chase the ring. This is what I wanted to do. I couldn’t fight it. If you fight, you’re always gonna be like, you shoulda, or what could’ve. I don’t like to live my life like that.”

Of course, Wade is from the Chicago area, and it seems as though his desire to return home and play in front of hometown crowds was more appealing than moving his family to Cleveland in the hopes of chasing another NBA championship.

Had Wade joined the Cavs, he likely would have become the starting shooting guard and the Cavs would no longer have needed to worry about re-signing J.R. Smith. His chemistry with James is undeniable, as the two have long been friends both on and off the court.

But his fit within the overall system wouldn’t have necessarily worked. Wade would’ve been playing alongside a dominating point guard in Kyrie Irving, and dividing the ball up between Irving, Wade and James would not have been an easy task.

And that doesn’t even include the fact that Kevin Love would’ve also needed touches. Without a true creator for teammates other than James, it is likely that Wade’s role would have been diminished greatly in lieu of the fact that Love and Irving are much younger players.

In Chicago, many of these same problems still exist, with Rajon Rondo and Jimmy Butler as teammates. But again, Wade gets to return home and play in front of friends and family. And like he has stated, there is no more reason for him to go ring chasing.

In the end, Wade opted for a big payday and the opportunity to come home.

And Cleveland fans should know all about how nice it is to see someone come home.