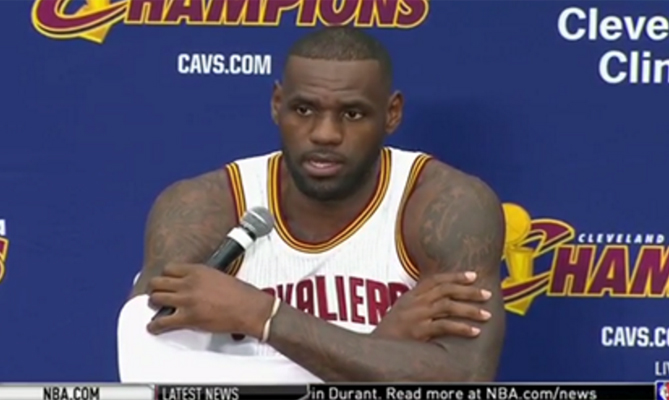 Prior to Game 7 of last season’s NBA Finals, Cleveland sports fans could offer a litany of woes when it came to near misses involving their teams: The Drive, The Fumble and The Shot all took place during the city’s infamous 52-year championship drought.

The Cleveland Cavaliers‘ LeBron James changed that with a single block, since it helped set up the game-winning shot and led to a celebration that saw over one million people attend the championship parade.

Asked to reflect on his iconic block of Andre Iguodala’s shot, James noted the magnitude of the effort during the team’s media day on Monday.

Delving further into how the play evolved, James mentioned his fear about the specter of goaltending ruining it.

“I swiped at it, instead of trying to pin it,” James said. “J.R. (Smith) was right on spot, and I told him, ‘If you see me coming or hear me roaring down the court, just don’t foul him. Just make the offensive guy just change his projection just a little bit, it’s going to give me a little time to get it.’

“My only thing was, when I was getting back on D, looking at the clock and looking at the play develop, I was thinking, ‘I know I can get there. Hopefully, the ref doesn’t call goaltending,’” James said. “Because there were still over two minutes left and it’s not a reviewable play. Once I got the block and landed, I was like, ‘Oh, I didn’t hear the whistle,’ and J.R. got the ball and we were good.”

Longtime fans of James already knew of his unique ability to swat away shots in that fashion, something that first emerged during his high school days in Akron. Decades after his career ends, those young enough to have seen it live will still remember it with pride.