LeBron James Picks the Best Play of His Entire Career 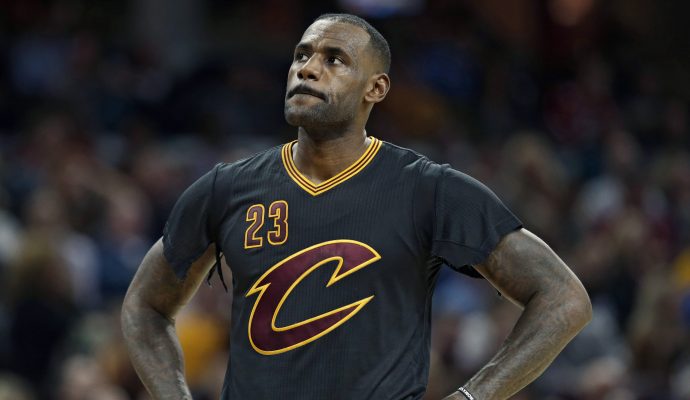 In his 13 seasons as an NBA player, the Cleveland Cavaliers’ LeBron James has put together an array of outstanding performances that long ago stamped him as a future Hall of Famer. Within those performances have been outstanding individual plays, with James not needing to look back far for his top selection.

James offered his choice during a wide-ranging interview with Alyson Shontell of Business Insider that encompassed a number of different topics. Not surprisingly, that selection was his iconic block of Andre Iguodala’s shot in the closing moments of Game 7 of the NBA Finals. That effort prevented the Warriors from breaking an 89-all deadlock and led to Kyrie Irving’s eventual game-winning three-pointer.

“I would have to say, coming off the top of my mind, that would definitely rank number one,” James said. “Just because of the magnitude of the game, what was going on at that point in the game, and I had to run through a couple guys, get around a couple guys to get to that position.”

James also put the block in perspective when noting the tortured legacy of Cleveland sports:

“It was a big moment, not only for that particular moment in the game, but for Cleveland sports history,” James said. “Now that you can look back upon it, a lot of people are saying so.”

Concluding his comments, James was most proud of the fact that despite being a force on offense, it’s a defensive play that will define him.

“You know, for me, I think a lot of people will base a game-winning jump shot, or a dunk, or something that happened offensively,” James said. “For a staple play, for my legacy to be a block, something defensively to help us win, that’s the ultimate for me.”

In the unlikely event that anyone has forgotten that specific block, there’s this quick refresher:

cleveland cavaliersfeaturedkyrie irvinglebron jamesnews ticker
← Previous Story Report: Sources Within Cavs Organization Give Update on Possibility of Kevin Love Trade
Next Story → Why 10/25/16 Could Be the Littest Day in Cleveland History