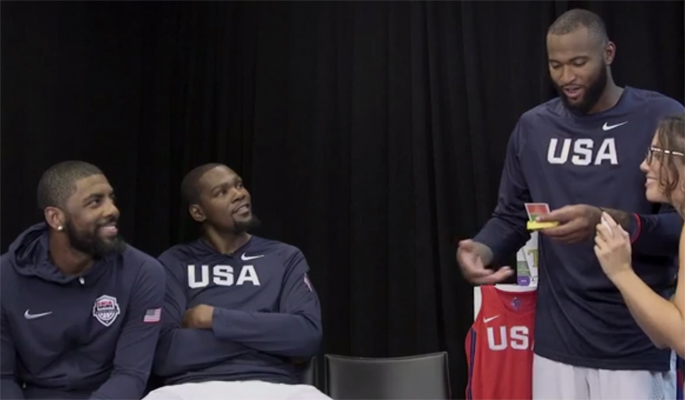 In the buildup to the 2016 Summer Olympics, the United States men’s basketball team has been practicing and taking part in scrimmages for play that gets underway on August 6. While free time is limited, the Cleveland Cavaliers’ Kyrie Irving found time to take part in a game of Taboo against three staffers from GQ Magazine, with his Olympic teammates DeMarcus Cousins of the Sacramento Kings and Kevin Durant, now of the Golden State Warriors, assisting Irving.

One portion of the competition was captured in a two-minute video on Twitter.

Cousins attempts to get Irving and Durant to figure out the words, “petrified” and “wired,” the latter of which Durant gets. That’s followed by the GQ staff guessing correctly on both words, “big bang” and “deck.”

The second round involves Durant describing “bend,” and “vine,” both of which Cousins gets. However, Durant is unable to explain his third word before time ends. The GQ trio then manages to correctly name, “limousine,” “pipe,” and “Dairy Queen.”

Irving then gets the opportunity to quiz his teammates, with the words, “beats,” “Gemini,” “loan,” and “wall,” all of which Cousins and Durant answer correctly. Trailing 7-5, GQ comes up short by first correctly answering on “flock,” but not beating the buzzer on “tank top.”