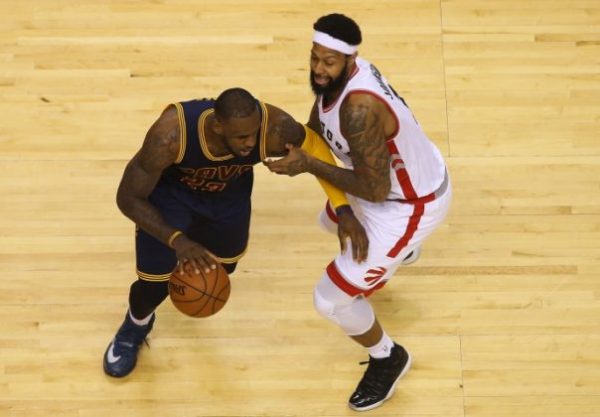 (Toronto, ON) – An inability to connect with the outside shot proved to be costly for the Cleveland Cavaliers as they watched their perfect postseason record come to an end, dropping a 99-84 decision to the Toronto Raptors at Air Canada Centre on Saturday night.

The Cavaliers hit on just 35 percent of their shot attempts on the night, with Kyrie Irving and Kevin Love each having a rough evening. The duo combined to connect on just 14 percent of their field-goal efforts: Irving hitting on just 3-of-19, while Love made just 1-of-9.

Despite their nights, LeBron James found a silver lining in his teammates’ performances:

“I think it’s good for them because it’s the first adversity they’ve faced in a while,” James said. “Those guys will be better.”

Irving left the court holding his chest, but Cavs head coach Tyronn Lue said there appears to be no lingering issues.

“I think he got the wind knocked out of him,” Lue said. “I don’t think it was serious.”

Things got heated between the two teams with just over 43 seconds left in the first half, resulting in a double technical foul call. Officials had originally called a technical on Toronto, but after viewing video of the incident, it was determined that Tristan Thompson had inadvertently struck James, sending him to the floor. Following that, the Cavs were able to tally the final five points of the quarter to trail 60-47 at the break.

“I can’t afford to react and get kicked out,” James said. “But I will protect myself.”

Chief among the Cavaliers’ first-half problems was the fact that four players: James, Irving, J.R. Smith and Channing Frye, combined for all but three of the team’s first half points.

“It was a tough shooting night,” Irving said. “These are the games that really build the character of our team.”

Lack of momentum in the final period then sealed the Cavs fate and guaranteed that a Game 5 will be played in Cleveland on Wednesday night.

James led Cleveland with 24 points, also contributing eight rebounds and five assists, while Smith finished with 22 points and five boards. Irving (13) and Frye (11) were the only other Cavalier players to score in double figures, while Love finished with just three points.

“They definitely hit some shots, but we’ll look at film and be ready for Game 4,” Irving said.

The Cavs defense was unable to shut down guard DeMar DeRozan, who ended the night with 31 points. In addition, they had no rebounding answer to counter Toronto’s Bismack Biyombo, who collected 26 boards.

“When you shoot 35 percent, there’s going to be a lot of rebounds available,” Lue said. “He did a great job of protecting the paint and he had eight offensive rebounds, which gave them more energy.”

Game 4 will take place in Toronto on Monday night, with tipoff once again set for just after 8:30 p.m. ET.