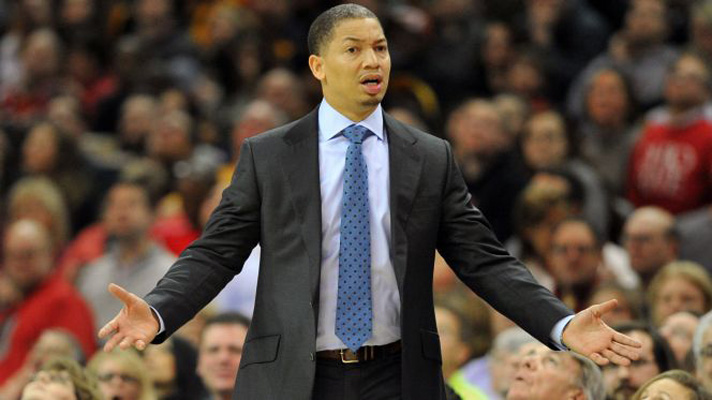 The volatile remarks by TNT commentator and Basketball Hall of Famer Charles Barkley on Wednesday night about the Cleveland Cavaliers’ record-setting night of three-pointers didn’t go unnoticed by Cavs head coach Tyronn Lue, who took exception to Barkley’s urging the Atlanta Hawks to “take someone out,” during Friday’s game as revenge.

“I don’t think there’s any place in our game to take someone out because they’re playing well,” Lue said in remarks that were reported by Akron Beacon Journal beat writer Jason Lloyd. “I think you can get yourself to play harder to stop a team from playing well, but when it gets to the point of trying to hurt guys or take guys out, that’s just not right. I don’t believe in taking guys out or trying to hurt guys because a team is playing well.”

“You’ve got to take somebody out,” Barkley said. “When a team is just embarrassing you, shooting threes when the game is way over, just trying to set a record…You have to knock the (heck) out of them. Not for this game; to set the tone for the next game.”

Even with fellow commentator (and former Cavalier) Shaquille O’Neal saying that he can’t say such things on national television, Barkley merely doubled down on his remarks.

In an effort to quell the furor from Barkley’s remarks, Lue made an effort to describe what went into the team’s Game 2 mindset:

“That’s something the players felt like was in their grasp and they wanted to go for it,” Lue said after Thursday’s team practice. “I don’t see anything wrong with it. We didn’t do anything malicious. I don’t think we did anything to rub it in their face. They felt good on the floor and wanted to go for the record.”

Still, the increased emphasis on long-range shooting, in conjunction with more driving in the paint, has led to the Cavaliers’ six-game winning streak. According to Lue, that means he and the team are now on the same page.

“It just means that guys have bought into what we’re trying to do,” Lue said. “I think right now we’re playing the way we want to play on offense and on the defensive end.”

To again point out the lack of intent on the Cavs’ part, Lue said that all Cleveland starters had been removed before the end of the third quarter and that the team’s reserves were the players who notched the record. He did indicate that a third-quarter timeout was in direct response to the team launching what he felt were too many three-point shots.