Detroit Pistons Looking to ‘Rough Up’ Kevin Love in Game 2 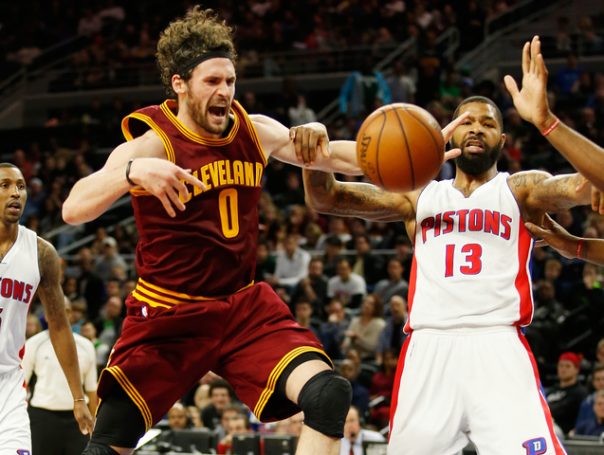 The success that the Cleveland Cavaliers’ Kevin Love enjoyed during Game 1 of the first round will be short-lived according to the Detroit Pistons, who plan to be more physical with him during Game 2 on Wednesday night.

Love collected a double-double with 28 points and 13 rebounds and connected on four three-pointers in the Cavaliers’ 106-101 victory on Sunday. However, in an article on MLive.com about the Pistons’ game plan for Game 2, a pair of Pistons indicated what could be done moving forward.

“Maybe rough him (Love) up a little bit,” Detroit forward Marcus Morris said. “I think he was just too comfortable. His confidence was too high. We’ve definitely got to get him out of that rhythm early.”

Morris will likely only be covering Love on a periodic basis, but the Piston who figures to battle Love the most is equally adamant about the team’s plan of attack.

“He’s a strong player but a lot of it’s just making his catches tough for him, pushing him out and just trying to make him make a tough shot,” Tobias Harris remarked. “He got into a rhythm early on, got a lot of open looks, and was able to make a lot of three-balls, especially off of missed rebounds that we weren’t able to get. That’s something they capitalized on as a team and that’s something that we discussed as a team that we have to be better at coming into Game 2.”

Love’s effectiveness as a center in the Cavs’ version of small-ball during Sunday’s fourth quarter was also addressed by Morris:

How Detroit addresses the issue may require them to also attempt their own version of small-ball, something they’ve yet to do this season.

Yet Pistons head coach Stan Van Gundy indicated that while some defensive tweaking might take place, no wholesale changes will be made.