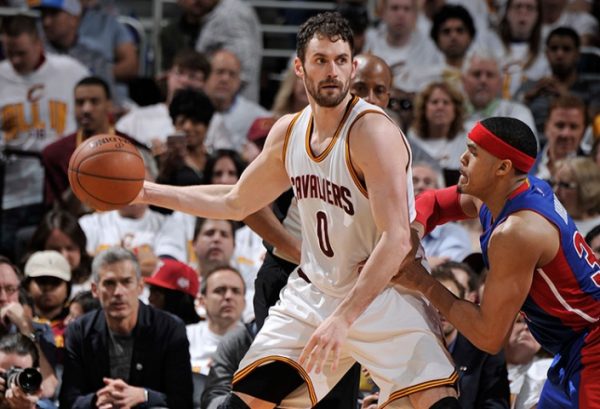 Any further questions about the level of importance Kevin Love brings to the Cleveland Cavaliers?

A year after seeing his first trip to the NBA Playoffs cut short because of a dislocated shoulder and two months after being rumored to be on the move to the Boston Celtics, Love demonstrated in Game 1 against the Detroit Pistons just how valuable he will be to the Cavs’ championship hopes.

His 28 points and 13 rebounds were needed in a game where the team, which finished the regular season with the best record in the Eastern Conference, found itself trailing by seven points a minute into the fourth quarter. Love’s two three-point field goals, which came not long after coach Tyronn Lue chose to go with a lineup that moved his star power forward to the center position, put the Cavs ahead to stay at long last.

Still think they’re better off without him on the floor for some or all of the final 12 minutes? Still think they gave up too much in sending Andrew Wiggins to the Minnesota Timberwolves in order to assemble a Big 3 headed by LeBron James?

Yes, James was terrific, scoring 22 points and handing out 11 assists while committing just one turnover in 41 minutes. And Kyrie Irving, who had to endure his own injury-related postseason misery last spring, went 5-of-10 from three-point range on his way to a game-high 31 points.

But the 106-101 victory over the Pistons was, more than anything, a Love fest. As Iman Shumpert, who was also part of the fourth-quarter lineup employed by Lue, told ESPN.com’s Dave McMenamin afterward:

“We’re happy for him. We know what he could have done for us last year during that playoff run. We missed him the whole time we were going through that run. And we’re more than excited to have him this year.”

The Cavs improved their record to 7-0 in games when James, Irving and Love combine for at least 80 points. And Love, the author of 35 double-doubles during the regular season, was clearly delighted to register another come playoff time.

“Between Kyrie and myself, we’ve had many conversations about our playoff run being cut short,” he said. “The way I look at it is an opportunity. I want to come out here, be really aggressive, have a next play type of mentality and just try to be one of the leaders out there and make an impact.”

Did he ever. On the three-pointer which put the Cavs up 94-90, Love kept a possession alive by saving the ball underneath the basket with a pass to J.R. Smith in the corner before it ended up in his hands again.

That type of hustle play was made possible in part by Lue’s decision to go with Love at the position ordinarily manned by Tristan Thompson. Andre Drummond was forced to try guarding Love 25 feet from the basket on pick-and-roll plays, and the results were disastrous for the Pistons.

Before the series began, very little stock was placed in the Pistons’ three victories over the Cavs in four meetings during the season. But one takeaway which wound up being relevant Sunday was that in Cleveland’s one win, Love hit five three-pointers and finished the game with 29 points.

The onus is on Detroit coach Stan Van Gundy to devise a way to neutralize Love’s effectiveness Wednesday night in Game 2. Even with James, Smith and Matthew Dellavedova going a combined 2-of-14 from three-point range, the shooting of Love and Irving was a positive factor and will remain a positive factor. And it’s doubtful that the Pistons, who finished the season ranked 21st in three-point accuracy, will turn in anything close to a 15-of-29 performance in that category again.

Love is here to stay. He’ll be a nightmare matchup for the Pistons in this series and for whoever else the Cavs face going forward.