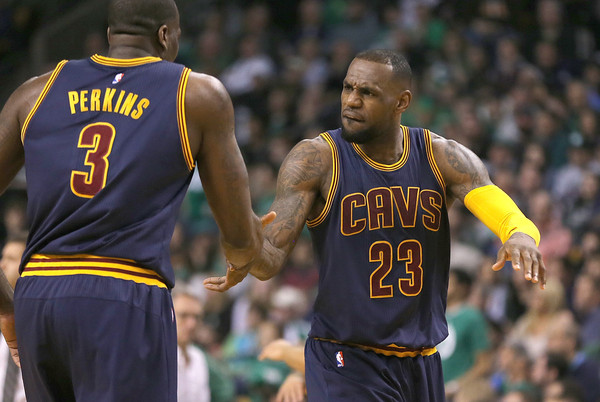 A menacing presence on the Cleveland Cavaliers appears to be a missing component in the team’s quest to win a championship, according to the Cavaliers’ two most important players and their head coach.

In short, the trio of LeBron James, Kyrie Irving and head coach Tyronn Lue fully believe that an enforcer will help deliver a clear message to opposing players about trying to intimidate or challenge the team. They’re of the opinion that the Cavaliers made a huge mistake last summer in allowing veteran Kendrick Perkins to leave as a free agent and sign with the New Orleans Pelicans.

Perkins only saw limited action after being signed by the Cavs in February 2015, but during his brief time on the court, he was more than happy to deliver a hard foul or set a crushing screen. That had made a huge impact in the team’s locker room.

So much, that a number of players were outraged when Cleveland chose to let Perkins walk. One of those players was James, who compared this year’s team to last season’s:

“As far as an enforcer, we don’t possess that this year,” James said. “Losing Perk was a big piece of our success last year, even with his limited minutes. But what he meant to our team both in the locker room and when he got his opportunity was huge.”

Irving specifically pointed to what an enforcer like Perkins helped provide, citing the untold value in having such a veteran:

“It’s vital. It’s vital. Having an enforcer like that, that has championship experience,” Irving said. “I don’t think we just necessarily want an enforcer, but enforcers are always on championship teams. They have that one guy that we put into the game. That Boston series, it changed drastically just because of Perk going in. We don’t have one of those this year. No replacement for Kendrick.”

Lue also pinpointed how Perkins helped galvanize the team, especially after Kevin Love’s controversial shoulder injury in Game 4 of the first round of the playoffs. Perkins leveled the Celtics’ Jae Crowder in retaliation for the injury and to protect James:

“Crowder was doing a great job of getting into Bron and being physical and we brought Perk in to kind of set the tone a little bit,” Lue said. “It kind of got us going. So, you need guys like that you can lean on that’s helpful when things get tough.”

Going further, Lue pointed out how Boston’s attempts at trash-talking were ignored by the team because of Perkins’s presence:

“When teams got out of sorts and they were talking stuff to the bench or taking stuff to our players, just having a guy you know you can lean on that guys respect as being tough in this league.”

From a historical perspective, Cavalier fans need only remember the solid Cleveland teams of the early 1990’s, which came up short to Michael Jordan and the Chicago Bulls. While trying to best Jordan was difficult enough, those Cavs squads were also derided as “marshmallows” for their supposed softness.

This generation’s Jordan is James, who won two titles during his four seasons as a member of the Miami Heat. During those two championship campaigns, he had otherwise nondescript players like Chris Andersen (aka Birdman) and Udonis Haslem to bring the hammer down on opponents, if necessary.

James put it succinctly when it comes to any title run: