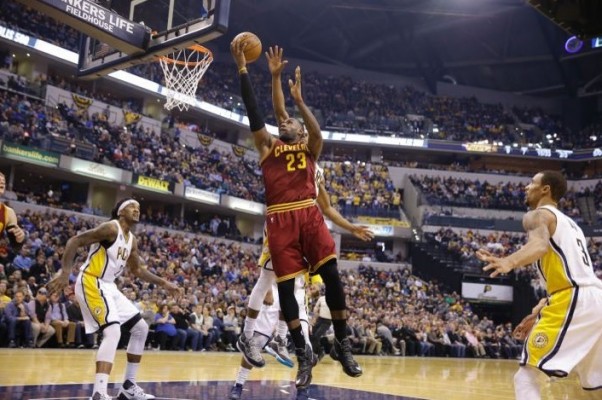 (Indianapolis, IN) – Kyrie Irving and LeBron James combined for 12 points in overtime to give the Cleveland Cavaliers a hard-fought comeback 111-106 victory over the Indiana Pacers at Bankers Life Fieldhouse on Monday night.

The win was the team’s fifth straight victory and also put an end to the Cavs’ 10-game losing streak at Bankers Life Fieldhouse, a streak dating back to the 2010-11 season.

Irving (25) and James (24) combined for 49 points in the game, as James picked up a double-double with 12 rebounds while also adding six assists. Irving added seven assists himself, while James was joined in double-double country by Tristan Thompson with 14 points and 12 rebounds.

Not to be outdone, Kevin Love scored 19 and had eight rebounds, while J.R. Smith tallied 19 and had some clutch moments that helped send the game to overtime.

Cavaliers head coach Tyronn Lue spoke about why James and Irving were such potent weapons on the night:

“We put Kyrie and LeBron on pick-and-rolls and they had to pick their poison.”

In the overtime, each team held the lead three times before James hit a jumper with 1:40 left. Love’s block with 48.9 seconds to go prevented the Pacers from re-taking the lead and allowed Irving to convert a pair of free throws at the 43.2-second mark to make it 107-104.

After Indiana sliced their deficit back to a point less than three seconds later, Irving converted two more free throws, and a last-ditch effort by the Pacers came up short and resulted in James being fouled. He then hit his pair of attempts with 3.3 seconds left to clinch the game.

James was asked afterward about the potential impact of the comeback.

“This was a really good test for us, to be able to make a late run like that.”

Irving spoke about how the team stayed focused:

“We had some resilience tonight,” Irving said. “We knew it was going to be a hard-fought game, and we just wanted to keep going with what was working.”

That overtime had been set up after some late fourth-quarter drama that saw the Cavaliers go more than four minutes without scoring before Smith drilled a three-pointer with 1:58 left to make it 93-92 in favor of the Pacers. Smith then forced a jump ball that the Cavs won, which turned into layup by James to give the Cavs a one-point advantage with 1:16 remaining.

Indiana answered with a three to retake the lead just 23 seconds later, but an Irving jumper tied the game with 44.3 seconds to go. The Pacers then had two shots to win the game in regulation, but a Monta Ellis shot at the buzzer was off to send the game to overtime.

That late comeback helped avert a disastrous third quarter, which saw Cleveland be outscored 30-15, falling victim to 26 percent field goal shooting during the period. That wiped out what had been a 60-49 halftime advantage.

Lue indicated that when the Cavs were struggling in the third, he had no intention of calling a timeout:

“We went back to our old habits, and I told them I wasn’t going to bail them out,” Lue said. “We just couldn’t get stops and they made us play half-court offense.”

Love spoke about how the team adjusted during this stretch:

“In practice, he (Lue) puts us in situations where we have to think.”

Early on, the Cavaliers were able to score inside on countless occasions in the first quarter, accounting for their 68 percent field shooting in the period. After briefly trailing at 12-11, they put together a 22-7 run to hold a 33-19 advantage. However, in the final minute, their sloppy play allowed Indiana to chop the margin in half by the end of the quarter.

“It was a great win for us, but I told the guys we can’t revert to old habits when things get tough,” Lue said.

James was asked how important continued strong play from Irving, Love and himself was in the months ahead:

“We’re the head of the snake,” James said. “Those guys in the locker room follow our lead.”

The Cavaliers will stay on the road for a Wednesday night matchup against the Charlotte Hornets. Tipoff for that matchup will be just after 7 p.m. ET. Cleveland won the only other meeting this season between the two teams, a 95-90 victory also in Charlotte back on November 27.