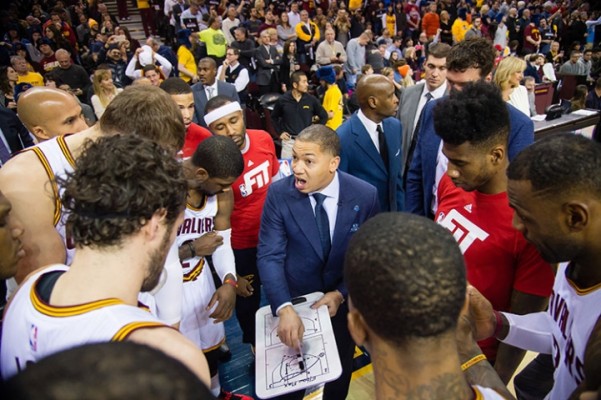 (Cleveland, OH) – After their victory over the Blake Griffin-less Los Angeles Clippers, the Cleveland Cavaliers (30-12) fell 96-83 to the Chicago Bulls (25-18) in Tyronn Lue‘s head coaching debut at Quicken Loans Arena on Saturday night, which marked only their third loss at home in 19 games this season.

“They’re not in terrible shape,” said coach Lue in his postgame press conference. “Just not in the type of shape that we need them to be in to play at the level we’re trying to play at.”

Following the sudden firing of former Cavs head coach David Blatt on Friday afternoon, who had a 30-11 record with Cleveland this season, the former Los Angeles Lakers guard Lue took over after he was given a three-year, $9.5 million contract to become the full-time leader at the helm.

“We just didn’t like the direction the team was going under him,” said LeBron James (26 points, 13 rebounds and nine assists) on his former head coach.

The Cavs simply could not get anything going on the offensive end against the Bulls, who continue to power through the absence of two-time All-Star center Joakim Noah.

Chicago power forward and back-to-back NBA Champion Pau Gasol was not phased by his team’s adversity as he went off for 25 points (11-of-16 shots made from the field), 10 rebounds and an impressive six assists on the night. Gasol, who had one of his more efficient games in recent memory, was very proud of his teammates.

“It was a great game on our part,” said Gasol after the game. “A nice way to bounce back after last night’s loss. I’m really proud of our guys for the way we competed and came out to play tonight. I wanted to be a little more aggressive and get in a rhythm early.”

Shooting guard Jimmy Butler had 20 points and nine boards for the Bulls, power forward Taj Gibson had 15 points and eight rebounds, while power forward Nikola Mirotic erupted off the bench for 17 points (5-of-9 from the field and 3-of-5 from beyond the arc) and six rebounds.

For the Cavs, who went a dismal 9-of-24 from the charity stripe and 4-of-24 from three-point range, got 18 points and 11 rebounds from shooting guard J.R. Smith as well as 14 points and five boards from power forward Kevin Love.

Up next, the Cavs will look to bounce back as the Minnesota Timberwolves (14-31) come to Cleveland on Monday night. The contest, which is scheduled to tip off shortly after 7:00 pm ET, will be broadcast live nationally on NBATV.