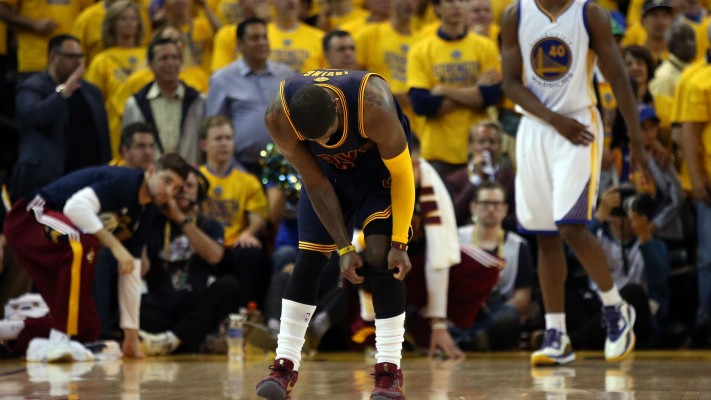 The image of Cleveland Cavaliers’ point guard Kyrie Irving as injury-prone was disputed by Irving himself, saying on a national radio program last week that injuries are simply a part of the game.

Currently rehabilitating from surgery for a fractured kneecap that he suffered in Game 1 of the NBA Finals last June, Irving made the statements during an appearance last week on The Doug Gottlieb Show that was broadcast on CBS Radio.

Irving acknowledged that people’s opinions are shaped by the injuries that he’s had during his career, but pointed out:

“For me, I know exactly what I’m doing in the weight room and exactly what I’m doing to prepare myself for the court, and if something happens, that’s just part of the game,” said Irving. “If I go out there and bump knees with someone and get a knee contusion and have to miss a game, and then I sprain my ankle, those aren’t things that can be planned.”

Stating that his work ethic and dedication to the game are as strong as ever, Irving said that the injuries aren’t taking a collective toll on his body to the point that it’s starting to break down:

“I’ll never not put myself in a position to be successful for my teammates and for my organization. I could see if I wasn’t putting in 100 percent effort in doing everything possible to prevent injuries, then cool, everyone can have their opinion and I’d start believing it,” Irving said. “But no way will I start believing that my body will break down and I can’t be better every single year.”

Prior to his arriving in Cleveland, Irving’s lone year of college basketball at Duke University was cut short by a toe injury. As a member of the Cavaliers, he’s also missed time due to a fractured index finger, sprained shoulder, bruised knee and strained bicep. During last year’s playoffs, he missed games due to a strained foot prior to his season-ending injury. In addition, he played through a small fracture in his jaw during the 2012-13 campaign.

When asked about his official return to the court, which was first mentioned with a January target date in mind, Irving said that he wouldn’t be gun-shy once he began playing again:

“Whether (my return is) in December, or whether that’s in January, I have to eventually test out my knee against competition,” said Irving.