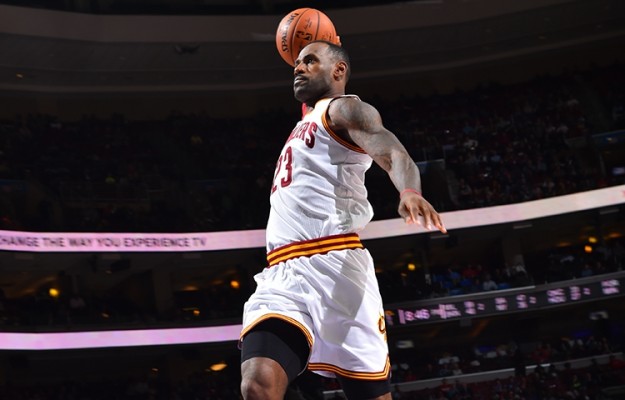 (Philadelphia, PA) – A 37-12 run that spanned the latter stages of the second quarter and most of the third period was enough to wake the Cleveland Cavaliers up as they defeated the winless Philadelphia 76ers 107-100 at the Wells Fargo Center on Monday night.

Solid defense and good ball movement were keys to the comeback that saw the Cavaliers down by as many as 15 during the first half. During that surge, the Cavs held Philly to just 29 percent shooting from the field and nearly matched their game assist total in the third period, collecting 10 during those 12 minutes of action.

In addition to the team achievement, a remarkable individual highlight came from LeBron James, who narrowly missed a triple-double, but still finished with 22 points, 11 assists, nine rebounds and four steals. The last two of those points helped him achieve yet another milestone in his storied career when he reached the 25,000-point threshold on a basket early in the fourth quarter. He is the 20th player to reach that milestone and becomes the youngest NBA player ever to reach that number.

James was asked after the game about reaching 25,000 points:

“It’s a heck of an accomplishment for me, but I try not to focus on individual efforts,” said James. “For the crowd to acknowledge it and give me a standing ovation, it’s special. I just try to play the game at a high level every night.”

Cavaliers’ head coach David Blatt was asked in the postgame locker room about whether he considered putting James back in to get one more rebound:

“We could have put Bron back in to get one more rebound, but I went with my gut and decided that wasn’t a good thing to do.”

A turnover-plagued first quarter saw Cleveland take an early 15-11 lead before the Sixers went on 21-3 run over the last 6:28 of the period. Half of the team’s eight turnovers occurred during this stretch, with all eight of the errors allowing Philly to notch 14 points.

The Cavs connected on six of their first ten shots, but then went ice cold, managing to connect on just one of nine attempts from the field for the rest of the quarter.

The 76ers held a 52-39 advantage with just over three minutes left before halftime. At that point, the Cavaliers charged back to close the half with a 10-2 run, fueled by eight unanswered points, and a 54-49 deficit at intermission.

Kevin Love spoke about the team’s slow start and whether the team was worried:

“We just had some lapses when we got out of transition,” Love said. “We just knew we had to play our brand of basketball. When we finished strong in the first half, we were confident we’d get the job done.”

Blatt was asked about what was said when the Cavs trailed:

“Just recognition of the fact that if we didn’t come back, we were going to lose,” said Blatt. “Not really being physical and the turnovers, that was the reason we were behind. Once we cleaned that up, we were able to get back on track.”

Once play resumed, the Cavaliers continued the push with a 15-2 run and a 64-56 lead. When James Jones hit a three with three minutes left in the quarter, they completed the run to hold a 76-64 lead.

Early in the fourth, the Sixers had a chance to get within five, but hustling defense converted a basket that was then followed by a thundering dunk from James for an 88-77 advantage.

Another James dunk pushed him past the 25,000-point mark, with the Cavs eventually leading by 21 at 100-79. After that, a late push by the 76ers and sloppy play by Cleveland cut the final margin to as low as six with just under a minute to play.

James was joined in double figures in points by Mo Williams with 21, Love with 15 and the duo of Matthew Dellavedova and Jones, who each contributed 12 points.

Jones, whose scoring came exclusively via the three-point shot, spoke about his approach to the game and the effect of his threes in the matchup:

“Anytime I get in the game, I’m hunting for the the three-point shot,” said Jones. “It was an injection that brought some life into the second unit.”

Philadelphia fell to 0-3, while the Cavaliers improved to 3-1 on the young season.

One down note on the night came early on, when guard J.R. Smith left the game five minutes into the contest with a right knee contusion.

Blatt was asked how the injury occurred, though he wasn’t sure if an MRI would be required:

“He locked legs with (Nerlens) Noel, I think,” Blatt said. “We’re anxiously awaiting the results of his examination.”

The Cavs will be back home on Wednesday night for the first of four consecutive games at Quicken Loans Arena when they host Smith’s old team, the New York Knicks in a game set to tip off just after 8 p.m. The contest will be shown nationally on ESPN.