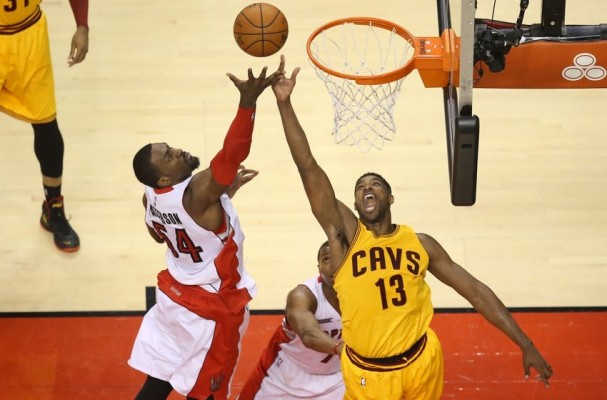 He may have signed Tristan Thompson to a five-year, $82 million deal but that doesn’t mean he’s fully satisfied with the power forward’s technique.

While Thompson is one of the top offensive rebounders in the NBA, general manager David Griffin believes the 24-year-old forward can improve on his defensive rebounding, according to Terry Pluto of The Plain Dealer:

“Tristan is not the defensive rebounder that he can be. It’s not a matter of work. He tends to play straight up, rather than making contact with his man.”

Pluto backs up Griffin’s claim by elaborating that Thompson doesn’t box out enough and that he excels at offensive rebounding because he often uses his athleticism, rather than physicality to grab boards.

Through the first three games of the season, Thompson has played 71 minutes and has grabbed 29 total rebounds. 22 of those boards were on defense, while seven have been on offense.

Griffin finished his thought be saying that Thompson is working on his defensive rebounding game:

“Tristan is embracing that challenge. He understands what he needs to do.”

The Cleveland Cavaliers general manager also addressed Kevin Love, and stressed that the team needs to make him a focal point so LeBron James and Kyrie Irving don’t have to carry the load so much:

“The coaches have a real weapon in Kevin and they need to exploit his talent even more. We don’t want LeBron or Kyrie to have to carry so much of the load. We want to keep the miles down on those guys. We can work the offense through Kevin more. You are already seeing it.”

Through the first three games of the season, Love has seen more touches as Irving recovers from injury. The 6’10” forward is averaging 19.5 points and 11.3 rebounds, while shooting 38.1 percent from beyond the arc.

With the team having championship aspirations this season, it is clear Griffin is expecting both Thompson and Love to step up their game in order for the Cavaliers to have a chance at finally getting over the hump in the NBA Finals.