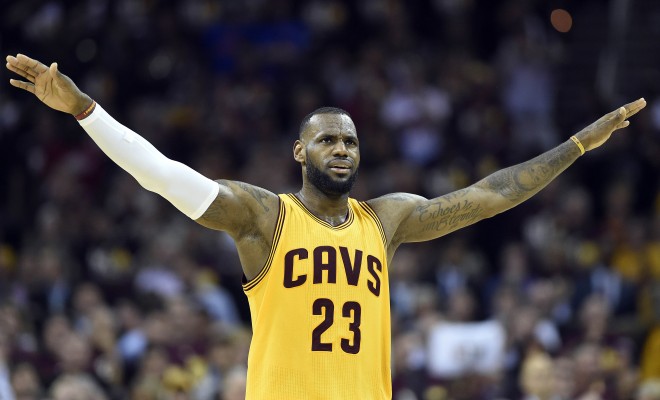 The last time LeBron James won an MVP award, he was on his way to winning his second consecutive championship in Miami.

That was two years ago before James made his return back to Cleveland. Entering the 2015-16 season, LeBron seems primed to win yet another MVP award in 2016.

The Cleveland Cavaliers will enter the season with a target on their backs—that would be because they are considered the favorites to win the NBA Finals in 2016.

Despite the fact that the Cavaliers fell to the Golden State Warriors in the 2015 NBA Finals, the majority of attention and chatter has been set on Cleveland rather than the defending champions this offseason.

That is in large part due to how James nearly lifted an undermanned Cavs team to a series victory over the 67-win Warriors in the finals. Cleveland was missing both Kevin Love and Kyrie Irving for essentially the entire series, and was able to win two games with Timofey Mozgov and Matthew Dellavedova as the second and third offensive options.

By his own lofty standards, James had a slightly underwhelming 2014-15 regular season. The four-time MVP averaged just 25.3 points and 6.0 rebounds on 48.8 percent from the field and 35.4 percent from beyond the arc.

While those numbers are amazing for any other player, they’re not so amazing for “The King.” His points per game and rebounding average was at its lowest since his rookie season, while his shooting percentage had not been that low since the 2007-08 season. His 69 games played was also the lowest total number of games he had appeared in during his 12-year NBA career (not counting the 2011-12 shortened season).

The fact that the Cavaliers struggled during the first half of the season combined with James’ “below average” campaign undoubtedly led to James finishing third in MVP voting in 2015. In fact, LeBron only garnered five first-place votes in comparison to MVP Steph Curry’s 100 first-place votes.

Which brings us to the topic question—will James win his fifth MVP award this season?

Let’s take a look at his prime competition for the award—that would be none other than reigning MVP Curry, James Harden, Anthony Davis and the returning Kevin Durant.

With the exception of Davis, every candidate mentioned is on an elite team. Playing on a championship-caliber team is essentially a necessity if you want to have a chance at winning the award. That pretty much rules out the New Orleans Pelican star no matter how amazing his stats are.

As efficient as Curry was last season, there is little doubt that the Warriors achieving the best record in the NBA last year was a large reason why he was able to run away with the award. When you factor in that nobody predicted that Golden State would be the best team in the NBA last season, it made Curry a no-brainer to win the MVP award.

Curry won’t have that advantage heading into this season. The Warriors are no longer the NBA’s best kept secret as they too have a target on their backs as the defending champions. In fact, the reigning MVP faces such an uphill battle to repeat as the winner that ESPN predicted he would finish fifth in MVP voting in 2016.

The other two candidates present the best case to challenge James for MVP supremacy. Harden is on a stacked Rockets team that came within a series of making their first NBA Finals appearance since 1995. The guard is so versatile offensively that he ranked second in points per game and seventh in assists per contest last season.

In addition, he led the league in free throws made and attempted, and ranked fourth in three-point field goals converted.

With the Rockets returning as one of the Western Conference’s elite teams, it would come as no shock if Harden were to win his first MVP award in 2016.

Now let’s talk about the wild card—that would be none other than the Oklahoma City Thunder’s Durant. Durant was the MVP winner after the 2013-14 season at just the age of 25.

Unfortunately for the Thunder star, injuries derailed him before and during the 2014-15 campaign. A diagnosed Jones fracture in his right foot sidelined him at the beginning of the season. Making matters even worse, Durant was sidelined yet again after undergoing a procedure to reduce pain and discomfort on his injured foot, effectively ending his season in February.

If Durant can get his numbers close to where they were the year he won the MVP award (32.0 points, 7.5 rebounds and 5.5 assists per game in 2013-14), and the Thunder return as an elite team in the Western Conference, there is no reason to believe the eighth-year forward can’t win his second MVP award.

While James should face some stiff competition for the award from Harden and Durant, it would take a lot for LeBron to not win his fifth MVP award in 2016.

If the Cavaliers notch the Eastern Conference’s best record and James improves his efficiency back to where it was during his Miami Heat days, it’s hard to envision a scenario where LeBron is not No. 1 in voting.

The spotlight and attention is all on LeBron for the 2015-16 season. Just several years after rubbing the media and public the wrong way with how he left Cleveland, the 30-year-old forward has everyone rooting for him to bring the Cavaliers their first championship in 2016.

If Cleveland plays like the best team in the league like everyone is expecting, and James produces a stat line of 27 points, seven rebounds and six assists per game with 52 percent shooting from the field, “The King” should walk away with his fifth MVP award following the conclusion of the 2015-16 regular season.