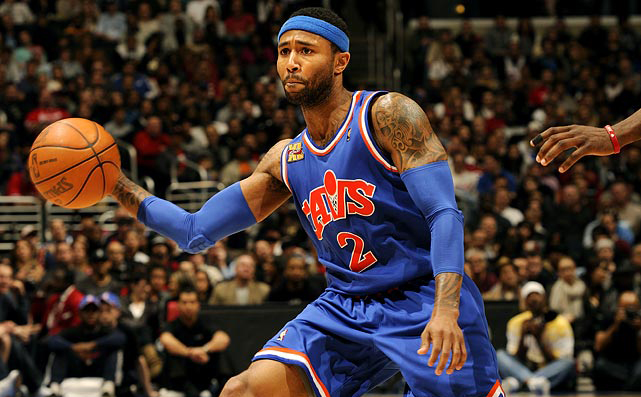 The return of point guard Mo Williams to the Cleveland Cavaliers was news that made sense on a number of levels, especially in regards to financial and depth issues related to the team. Williams, who will turn 33 in December, will have a new role in this comeback, one that will hopefully protect the team from the disaster that very likely cost the Cavaliers their first NBA title.

Williams can still put points on the board, which is one reason why signing him appealed to the Cavs’ front office. Still, the question about exactly what Williams can provide to the team’s offense is one that remains.

During his previous two-plus seasons from 2008-11, Williams was a fixture in the team’s backcourt. In his first season, he was part of a squad that won 66 regular season games, a record for the franchise. That season, Williams reached a peak in scoring by averaging 17.8 points per contest.

Those numbers would begin to decline until hitting bottom during his one year with the Portland Trail Blazers in 2013-14, when his scoring average dipped to 9.7 per game. However, a resurgence took place this past season, when he again became a part-time starter and averaged 14.2 points while playing for both the Minnesota Timberwolves and Charlotte Hornets.

The clearest indication of what Williams could still do with the ball was shown during the Timberwolves’ January 13 game at Indiana. Connecting on 19 of 33 shots from the field, Williams torched the Pacers for 52 points, one of eight games with Minnesota in which he tallied more than 20 points.

After heading to Charlotte, he had a 12-game stretch that began in late February that saw him average 21 points a game.

Outside of his rookie year and the aforementioned 2013-14 campaign, Williams has always averaged double-digits in scoring, and has never been shy about launching up shots. He also still has a knack for being able to effectively dish the ball to teammates, something LeBron James can attest to from their two previous seasons together when Williams averaged 4.6 assists per game.

That year with Portland and his only full season with the Los Angeles Clippers in 2011-12 were years in which Williams was strictly a reserve, which will be his role with the Cavaliers. In that season with the Clippers, he averaged 13.2 points per game.

Combining those two seasons means that Williams was good for approximately 11.5 points a game. While that doesn’t overwhelm anyone, compare them to the average production of Matthew Dellavedova during his two seasons with the Cavs: 4.7 points.

Williams averaged roughly 26 minutes per game in those two reserve years, compared to Dellavedova’s 19 per contest. Even taking into account the additional time on the court that Williams spent still makes him a more productive option.

Plus, Williams does have experience as a shooting guard, which could allow head coach David Blatt to shift the guard over on those inevitable nights when J.R. Smith (assuming he re-signs) is ice-cold with his outside shot.

Of course, the underlying idea behind giving Williams more minutes is to keep Kyrie Irving refreshed, and more importantly, healthy. Irving’s scary injury history and the impact it had on the NBA Finals is etched into the mind of every Cavalier official, player and fan.

In many ways, Williams is like Smith, a free-wheeling shooter who can fall victim to cold spells when it comes to his shot. However, Williams won’t be looked upon as an integral part of the lineup, just a potentially valuable chip to have when needed.

Plus, Dellavedova will still be around to inject some fire into the team when necessary. The NBA Finals unfortunately showed that Dellavedova’s threshold for effectiveness reaches a certain point before quickly diminishing. Using him as a third option will allow his all-out energy to be maximized.

Williams gives the Cleveland offense just a little more push, with the starters providing much of the support in that area. Whatever he can give will undoubtedly be more than what was provided last year, which in turn will hopefully lead to a happier ending.